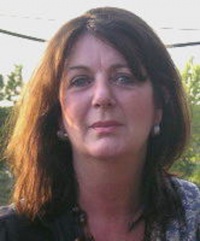 According to the Sunday Times, she is active in the counterjihad movement under the pseudonyms Gaia and Dominique Devaux.[1]

A lawyer for Marchini gave the following statement to the Sunday Times:

"Ann Marchini does not operate under the alias of either Dominique Devaux or Gaia. She is a member of British Freedom, but joined only to show support for her personal friend Paul Weston [the chairman]."[1]

Further evidence of Marchini's role in the counterjihad movement is provided by the original version of a Gates of Vienna blogpost which contains a press release from the Center for Vigilant Freedom with Marchini's name and phone number provided as contact details.[2]

Marchini and Christopher Knowles attended an OSCE Human Dimension Implementation meeting in Warsaw in September/October 2009, on behalf of the Center for Vigilant Freedom's International Civil Liberties Alliance. Elisabeth Sabaditsch-Wolff of Bürgerbewegung Pax Europa was also present,[3] as was - according to one source - Edward May who runs the blog Gates of Vienna.[4]

In 2015 she was in a Hyde Park audience which also included former English Defence League (EDL) funder and strategist Alan Ayling (aka Alan Lake) watching a speech by Anne Marie Waters of UKIP and Sharia Watch UK.[4]

British group Hope Not Hate describes Marchini as a millionaire who lives in Highgate, north London and states she provides a connection between funders and counterjihad activists. The group claims she was the person who linked up Germany’s Patrik Brinkmann with Canadian industrialist Bjorn Larsen, leading to the Geert Wilders rally in Berlin in Oct 2010.[4]