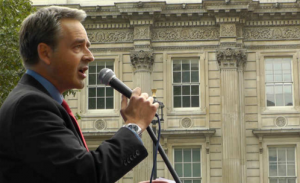 A former UK Independence Party parliamentary candidate, he was chairman of the far-right British Freedom Party from November 2011[2] until he was replaced by the former EDL deputy leader Kevin Carroll in early January 2013.[3]

He then became chairman of Liberty GB, which describes itself as 'a patriotic counter-jihad party for Christian civilisation, Western rights and freedoms, British culture, animal welfare and capitalism'. [4]

Weston stood in the 2015 general election against Labour Luton South MP Gavin Shuker, who has described him as 'racist'.

Weston, who is from Dorset, described Luton as 'a hotbed of violent [Islamic] extremism' and said he wanted to 'remove the "supremacist" ideology of Islam from Britain', along with the minarets.[5] Local voters largely ignored Weston, with just 158 people (0.4 per cent) voting for him in 2015.

In January 2015, Weston was announced as the head of Pegida UK, a far-right nationalist group which originated in Germany and campaigns against the 'Islamification of Europe'. [6]

Arrested on suspicion of religious or racial harassment

In 2014 Weston was arrested by Hampshire Constabulary after complaints from members of the public about his reading of a Winston Churchill quote describing Islam as “militant” and “retrograde” through a megaphone outside Winchester’s Guildhall.

The Southern Daily Echo reported that Weston had addressed passers-by with an excerpt from former Prime Minister Churchill’s book The River War, written in 1899 while he was a British army officer in the Sudan. [7]

Left UKIP for being 'too soft on Islam'

Weston stood as the UKIP parliamentary candidate for the constituency of Cities of London & Westminster in the 2010 general election, gaining 664 votes.[8]

In December 2010, Weston visited Israel with a counterjihad delegation which included "Filip de Winter of the Vlaams Belang; Heinz Christian Strache of FPO and Rene Stadtkewitz, leader of the Geert Wilders inspired and recently formed German Freedom Party, or Die Freiheit", according to Weston.[10] Haaretz columnist Adar Primor, described the visit as part of "the very unholy alliance between figures on Israel's right and extreme nationalists and even anti-Semites in Europe that is gaining momentum in the Holy Land."[11]

According to a 2015 report by British group Hope Not Hate, Weston has attended demonstrations of the English Defence League (EDL).[12]

Following the Utoeya massacre in Norway, Weston attacked the BBC in an article which appeared on the English Defence League website, writing:

have written before that a future religious civil-war will be preceded by tit-for-tat small scale atrocities and now we have seen the start. By shamefully closing down a desperately needed debate in order to pursue perverse and politically driven objectives, Paxman, the BBC and the entire political liberal/left have ensured the inevitability of potential carnage and thus have the blood of future innocents on their hands alongside those of the inevitable psychopathic perpetrator.[13]

In an interview for LBC Radio he said Muslims should 'not hold political power because they put Islam as their primary allegiance' in Britain, also describing all asylum seekers as 'migrant invaders' and claiming 'there is no such thing as a Syrian refugee'. [14]