Studies in Conflict and Terrorism 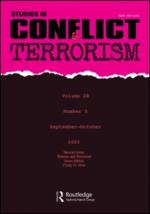 Studies in Conflict and Terrorism (ISSN 1057-610X) was founded in 1992 by the merger of two separate terrorism publications Terrorism: An International Journal the volume numbering of which it continued (from volume 15) and Conflict (ISSN: 0149-5941)[1] both journals were published by New York based publisher Crane Russak. Studies in Conflict & Terrorism is published monthly for a total of 12 issues per year. [2]

The journal is one of the two leading journals on terrorism, the other being Terrorism and Political Violence. Both journals are published by Routledge part of the Taylor and Francis group, which is in turn part of the Informa Group which has helped to fund the Centre for the Study of Terrorism and Political Violence at St Andrews University. The St Andrews Centre is well represented on the editorial board and the rest of the board is dominated by terrorologists fully signed up to supporting Western power.

Studies in Conflict and Terrorism aims to 'cast new light on the origins and implications of conflict in the 21st Century and to illuminate new approaches and solutions to countering the growth and escalation of contemporary sub-state violence.' [3] Specifically the journal addresses security challenges that are fuelled by religious and nationalist strife, disputes over natural resources, and transnational organized crime. [3]