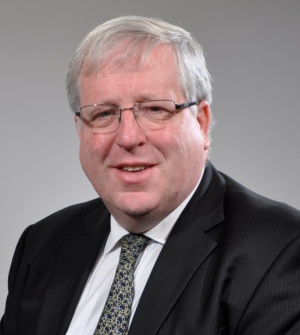 Patrick McLoughlin is the Conservative Party chairman and chancellor of the Duchy of Lancaster, having been appointed on 14 July 2016 by new Prime Minister Theresa May. [1]

In the 2015 general election, McLoughlin retained his seat with a majority of 14,044. He will also remain in the Cabinet as transport secretary. [4]

Prior to becoming an MP, McLoughlin sat on Staffordshire County Council from 1981 to 1987 and Cannock Chase District Council between 1980 and 1987.

He has held various positions in government, including parliamentary under-secretary of state at the Department of Trade and Industry and government whip. In opposition, he served as chief whip from 2005 to 2010. He was Governments chief whip in the House of Commons in the coalition cabinet appointed in 2010.

Details of the attendees and seating plans of the Conservative's 2013 summer ball, an event where tickets cost up to £12,000 each and allows attendees to sit at the table with ministers, were leaked by the Guardian. It revealed McLoughlin sat with 'shipping to aviation magnante' Constantine Logothetis and Laurent Cadji, owner of Union Maritime.[6]

Under new rules brought in in 2015, MPs must disclose all family members engaged in lobbying the public sector, however McLoughlin failed to mention his James McLoughlin is the deputy head of policy at the Institute of Directors and a former associate partner at Bell Pottinger.

'A source close to the transport secretary said he had been advised by parliamentary authorities that he did not need to declare the link because it was only necessary to list family members engaged in consultancy lobbying'.[7]

His constituency includes one oil and gas licence block, awarded to INEOS by the Oil and Gas Authority under its 14th licensing round in 2015. There are currently no plans or applications to drill for shale underway. [8] In August 2015, INEOS said they could start test-drilling by the end of 2016 or early 2017, with the 'early stages of producing commercial gas by the end of the decade'. [9]

McLoughlin has voted a mixture of for and against greater regulation on fracking. [10]