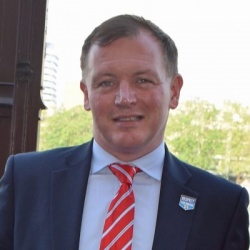 Damian Collins is the UK Member of Parliament (MP) for Folkestone and Hythe, first elected in the 2010 general election.

Collins is a former lobbyist for Lexington Communications.

In September 2012 he became parliamentary private secretary to the Northern Ireland Secretary Theresa Villiers, who was appointed in the cabinet reshuffle. [1]

Collins made his maiden speech in the House of Commons on 27 May 2010 in the debate on energy and the environment in the Queen's Speech debate. He explained that in his constituency, which includes the Dungeness B nuclear power station operated and owned by EDF Energy:

Environmental reasons and concerns about coastal erosion and associated flood risk saw proposals for a new third nuclear power station, Dungeness C, omitted from the previous Labour government's 2009 shortlist of potential sites for new stations.[4] It was later also ruled out by energy minister Chris Huhne in October 2010. Collins has however continued to vociferously lobby the government on the issue. During a House of Commons debate in 2011, energy minister Charles Hendry called him "a doughty champion of the case for Dungeness" but said he "will have to be patient for a little longer" for the decision of a UK government nuclear review after the 2011 Fukushima disaster in Japan. [5] In May 2012 after the government published its draft energy bill, Collins once again raised the issue with prime minister David Cameron at a private meeting for Kent MPs at 10 Downing Street.

Despite his strong pro-nuclear stance Collins is however opposed to a controversial planned nuclear waste site on Romney Marsh, which is going through public consultation. [6]

In 2010, Collins was interviewed by Conservativehome for their '20 Questions for the Class of 2010' quiz. Asked, "if you could run any government department, which would it be and why?", he replied:

I have been calling for Dungeness in my constituency to be included on the list of preferred sites for a new nuclear power station, so if I was running the Department of Energy, I know what I would do.

Later, he was asked what did he most want to achieve in his first term in Parliament? The answer was direct. "Securing support for a new power station at Dungeness." [7]

‬‬In August 2013, Collins accused anti-fracking campaigners of 'scaremongering' and said risks to health and the environment associated with the process had been exaggerated. [8]

Collins is a former senior counsel for Lexington Communications, which provides lobbying and consultation services to fracking companies Cuadrilla and IGas. He is married to Sarah Richardson who works for Edelman, which represents and lobbies on behalf of the Task Force on Shale Gas.

Collins has generally voted against increased regulations on fracking . [9]

Collins is married to Sarah Richardson who is an employee of Edelman PR. [10]