Admiral Sir Trevor Soar KCB OBE was British Commander-in-Chief Fleet, Commander Allied Maritime Command Northwood and Vice Admiral of the United Kingdom before he retired from the navy on 6 January 2012.[1]

Upon leaving the navy he set up his own company, Trevor Soar Strategic Consulting Ltd.[2] 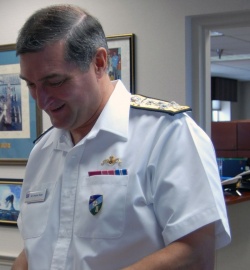 In 2012, Soar was one of several retired senior army officers targeted in a sting operation by Sunday Times journalists during a three-month investigation into the revolving door between the Ministry of Defence (MoD) and private arms companies. [5] The paper had been tipped off by a former civil servant that MoD procurement was being 'contaminated' by retired generals lobbying for arms firms.

According to the newspaper, Soar boasted that he would 'ignore' his two-year ban on lobbying ministers and said the system used to enforce the rules was 'broken'.

In a London hotel Admiral Sir Trevor Soar hesitated when asked if he would be willing to lobby ministers on behalf of the fake South Korean company, but quickly appeared to overcome his qualms.

"I have to be slightly careful of lobbying ministers. There's no reason I can't see them but there's again some criteria on that," said Soar, who retired as commander in chief of the naval fleet earlier this year.

"So how do you get round that?" asked one reporter. "You just basically ignore it," came the prompt reply.

Soar said that the rules "have no legality" and he dismissed the system for enforcing them as "broken".

He was keen to assure the reporters of his credentials for the lobbying job they were hiring him to do. "I've had six jobs in the Ministry of Defence, so … I'm a bit of a … MoD warrior. So I'm very familiar with the procurement, the way it … happens and certainly the politics—I know all the ministers," he said.

Once he was fully satisfied that the drone on offer was a decent bit of kit, Soar said he would approach his former subordinate, Rear Admiral Peter Hudson, and Rear Admiral Ian Jess, who he said had been given a new job in defence goods, which he had created personally before he left. "Are they chums of yours?" asked one of the reporters. "Yeah, they all worked for me. I was their boss … They've all done all right so I don't think there is any antagonism there … We would target those individuals and get them interested," Soar replied.

At a celebratory dinner with the undercover reporters, however, Soar and Applegate were 'alarmed' by the use of the word 'lobbying' in a draft agreement:

"The word 'lobbying'," said Applegate, is "the sort of thing that can cause problems".

Soar was quick to agree: Yeah, I mean theoretically we are banned from lobbying ministers for two years … The reality is we call it something different but the word lobbying would be contrary to the terms and conditions, and it would certainly apply to me as I only left the service in March."

Asked what he preferred to call it, Soar replied: "Consulting.

When confronted last week, both men denied that they had broken the Acoba rules. Soar said all his private jobs had been given official approval and he was motivated by bringing "battle-winning equipment to the navy. [7]

In a statement made by Babcock International, with whom Soar had recently started working with as an independent consultant, Soar 'expressed regret over the embarrassment caused by his interview, and his resignation has been accepted by the Company'. [8]

Admiral Soar retired from the Crown Service on 16 March 2012. He subsequently sought permission from the prime ministers Advisory Committee on Business Appointments (ACOBA) 'to set up as an independent consultant offering services to a wide range of business leaders on long-term strategy; formulation of business plans; and leadership and risk management' and to accept a commission with:

Soar was also given approval to carry out consultancy work for the following companies:

Lobbying ban for two years and other conditions

ACOBA gave its approval for Soar's application to become an independent consultant in April 2012 and to take up his commission with Babcock.

When considering the application, the Committee noted that Admiral Soar's intention was to provide strategic business advice not specific to defence or to specific contracts. The Committee also noted that his last day in post was 6 January 2012, that he had confirmed that in his previous role he had limited influence over MOD commercial arrangements, and that he had not exerted any influence over MOD contracts or commercial arrangements over the past two years.

The Prime Minister accepted the Committee's recommendation that the application be approved, on the basis that Admiral Soar would not draw on privileged information available to him whilst in post, subject to the conditions that:

-for six months from his last day of service, he should not seek to accept any commission with companies in the defence sector; and

-for 12 months from the same date, he should not undertake any work which involved providing advice to any company or organisation on the terms of any bid or contract relating to the work of the MOD; and

-for two years from the same date, he should not become personally involved in lobbying UK Government Ministers or Crown servants, including Special Advisers, on behalf of his clients; and that