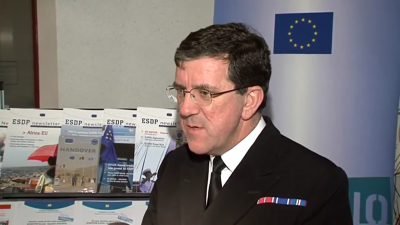 Vice Admiral Peter Hudson served as NATO Commander, Allied Maritime from February 2013 to October 2015. [1] His career as an officer in the British Royal Navy spanned 36 years. As Lieutenant-General he was Deputy Commander-in-Chief United Kingdom Land Forces from 1977 to 1980.[2]

In 1968 Hudson was Commander of the 39th Infantry Brigade, one of three British Army brigade headquarters in Northern Ireland from the outbreak of the troubles in 1969. It covered the Belfast area and its commander reported to the Commander Land Forces (Northern Ireland).[3]

In February 2017 Hudson was appointed senior adviser for military and defence at PR and lobbying giant Burson Marsteller. [4] The appointment, initially for two days a week over six months but since extended into 2018 at least, will see him spearhead the firm's attempts to win more defence and security sector clients. B-M's clients include defence contractor Raytheon and the Islamic Military Counter Terrorism Coalition.

More recently in 2018, Hudson has started a new job as senior naval adviser to BAE Systems in Sussex.[5]

Hudson was director of International Maritime Programmes at US-based arms supplier L3 Technologies from September 2016. [6] L3 is a supplier of equipment to the UK MOD.

In August 2016, Hudson set up an independent consultancy to provide strategic advice on 'future operational landscape and potential crises' across Europe and the international community. [7]

Despite the outlined commissions being closely linked to Hudson's most recent role NATO role, the Ministry of Defence (MOD) expressed no concerns. His first commission is subject to a six-month wait from his last day of Crown service, and the Advisory Committee on Business Appointments (ACOBA) said that he should not personally lobby government on behalf of his clients, or draw from any privileged information relating to the MOD, for up two years.

He has been managing director of Fordwater Consulting since May 2016. He describes it on his LinkedIn profile as 'a small consultancy company providing support for civ/mil training, international risk analysis, maritime affairs and wider security issues'.[8]

Under his independent consultancy, Vice Admiral Hudson has accepted commissions with:

'We are delighted to welcome Peter aboard. His distinguished Royal Navy career speaks for itself and his deep knowledge of EU and NATO command structures, as well as his insights into the defence and security industry, will be a considerable asset for our present and future clients.

It is a privilege to be joining one of the world’s premier agencies.The team at Burson-Marsteller attracted me by its vision, ambition and passion to deliver. I am confident my expertise in strategic planning and defence policy, as well the day-to-day operational aspects of NATO and the EU, will add genuine value to the firm and its clients.

Although ACOBA approved Hudson's new role in January 2017, the committee did not publish the letter on its website until nearly six months later on 31 May 2017.[9]

Hudson's LinkedIn profile notes that this contract and the L-3 Communications role both ended in January 2018, upon his taking up a new senior naval advisory role at BAE Systems.[10]