The Obesity Awareness and Solutions Trust

From Powerbase
(Redirected from TOAST)
Jump to: navigation, search

TOAST is a charity which acts as a front for the weight loss industry. As of the end of November 2007 it announced it was to close.

By early December 2007 the TOAST website was suggesting another website to people. When accessed on 4 December 2007 the TOAST website had the following: "You may also like to contact fathappens (buddypower.net) at www.fathappens.com." This is a web based support forum set up by Anne Diamond (Patron of TOAST) to enable overweight people who want to become slimmer to share views and find supportive friends. Previously called "fathappens" it changed its name on 29 October 2007 to "buddypower" The buddypower site also carries podcasts from LighterLife UK Limited, [1]

Accessed on 12 December the TOAST website was carrying links to the following organisations:

In 2005 it launched a new website in which it claimed that it was an independent organisation:

TOAST is a completely independent Charity. (The Obesity Awareness & Solutions Trust: Charity Reg No: 1088049). It derives its income from individual donations and membership fees from those who wish to support its work for the benefit of those living and working with obesity. Whilst TOAST also receives support from time to time from pharmacuetical companies and other organisations dealing with obesity and weight loss issues, it remains an autonomous organisation, operating on an impartial basis, free from all external control.[2]

TOAST is to cease operation following 10 years of advocacy and the promotion of Obesity Awareness. According to their website

"TOAST has effectively achieved its objectives of raising awareness of Obesity as one of the most significant health concerns of the 21st Century. However, The Trustees have unanimously agreed that the task of finding the solutions to the problem is too large for a charity of this size. TOAST has successfully advanced the debate and we are now handing over the complex task of finding the solutions to other agencies better positioned to carry this out." [6]

TOAST listed a large number of parliamentary patrons (see below). However some of these have commented that they either did not know they were listed as patrons and had not agreed to be patrons. These included Jim Dowd who stated that he had not agreed to be a patron.[7] Pauline Perry (Baroness Perry) stated 'They pursued me relentlessly for a meeting, which I declined! I had no idea that they were so substantially financed by Lighterlife.'[8] Frederick Howe (Earl Howe) wrote:

You ask whether I was previously aware that donations to TOAST were from LighterLife UK Ltd. I was certainly not aware of this, nor, until your letter arrived, had I heard of Lighterlife. In my meetings with TOAST over the years (latterly with Louise Diss, who has now left the organisation) the subject of funding has regularly come up. I was always given the impression that a large element of the charity's budget was met by a mixture of membership fees, grants from charitable trusts and a grant from the Department of Health: clearly this was not so.[9]

Lord Walton of Detchant noted that 'I was not aware that LighterLife UK Limited had given such substantial support to TOAST, a charity of which I agreed to be a Patron several years ago. this financial information is completely new to me.[10] According to Baroness Masham of Ilton 'As far as I know I have not heard of any connection between LighterLife and TOAST, but I have not been to all the meetings, as so many of these coincide with other things.'[11] Adrian Sanders MP stated: 'I was not aware of any connection between Lighterlife and TOAST.'[12]. Ian Gibson MP stated:

I was absolutely not aware of this connection and my initial reaction is to be pretty cheesed off. I am also very concerned about the origin of these large donations. It can be necessary when campaigning in healthcare to accept money from large, often pharmaceutical, companies. The annual conference of the All Party Parliamentary Group on Cancer of which I am Chair is an example. However we take equal amounts of unrestricted sponsorship money from a number of sources which we then clearly publicise. If it emerges that the TOAST money has come from one source and that people with vested interests have been involved then there is cause for concern.[13]

Northover became a patron of TOAST through her involvement as Lib dem health spokesperson. She says she was unaware of the link between TOAST and the diet company LighterLife: 'No, this commercial link was not mentioned to me.'[14] She was invited to join TOAST in 2004. 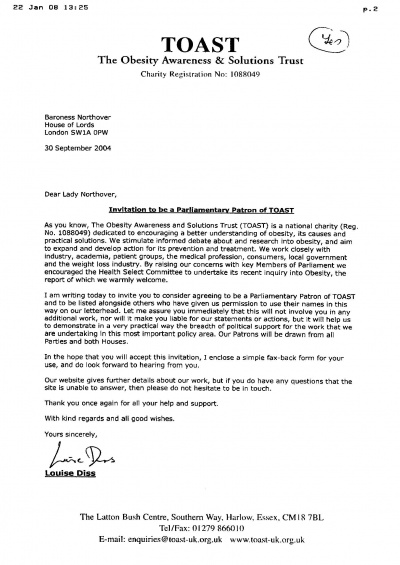 Invitation to join TOAST as a Patron

The UK Obesity Awareness Week was held in March 2007. The event was started by TOAST in 1998. This year TOAST had several events planned including the opening of a Community Gardening project in Ingatestone, Essex, highlighting an alternative solution to weight loss, a Parliamentary Reception at the Palace of Westminster and the announcement of the David Kennedy Memorial Award 2007, launch of a new Kids website and the announcement of a new awareness initiative for 2007/8. The parliamentary reception was held in the House of Common's Terrace Marquee on 15th March. The event was sponsored by David Amess MP, a longstanding supporter and patron of TOAST. The event was addressed by the Health Minister Caroline Flint who outlined the Government's plans to tackle obesity and improve the services available. She also acknowledged TOAST's contribution towards helping those who are overweight and obese and developing better services to support them. Over 100 people attended the event, including a number of parliamentarians and officials as well as wide range of other stakeholders representing the public, voluntary and commercial sectors. [15]

In May 2004,in the House of Commons, David Amess raised the issue of Government funding for TOAST having been withdrawn. Amess told the house " Jackie Cox and other members of The Obesity Awareness and Solutions Trust came to my surgery to discuss obesity. I raised the matter in the Health Committee....Members of the Committee agreed to an inquiry, the report of which has been published today.... TOAST inspired the Health Committee to conduct its inquiry, but its funding has been withdrawn under section 64 of the Health Services and Public Health Act 1968. It had tremendous plans to build a centre of excellence, the TOAST house, to run a mobile drop-in centre and to produce the "TOASTbites" journal..." [16]

In June 2004, Chris Grayling directly asked in the House of Commons, why TOAST had not received any money under the section 64 grant scheme. He was told by Melanie Johnson that "The Department has supported the work of The Obesity Awareness and Solutions Trust (TOAST) for two years (2001–02 to 2002–03) through the Department's Section 64 Grant Scheme.Due to an administrative oversight, they did not apply for funding for 2003–04 but made an application for 2004–05 for three years. A large number of applications were received for funding from April 2004 which resulted in intense competition for limited funds. This has resulted in a number of applications being rejected, including the applications from TOAST."[17] However, eight days later Lord Morris of Manchester asked the same question in the House of Lords. The reply he received was that there had been a large number of applications, resulting in intense competition and so TOAST had being rejected.[18]

Section 64 grants are discretionary grants that the Secretary of State for Health, through the Section 64 General Scheme of Grants (S64 of the Health Services and Public Health Act 1968), has the power to grant to voluntary organisations in England whose activities support the Department of Health's policy priorities. [19]

In 2006 TOAST claimed on its website that it had been successful in what it called 'lobbying':

We have been extremely successful in raising obesity in the political arena and it was TOAST, together with other lobbyists, that was responsible for the All Party Select Committee on Obesity being formulated.[21]

According to their PR agency:

The Obesity Awareness and Solutions Trust (TOAST) is a national charity (Reg. No. 1088049) dedicated to encouraging a better understanding of obesity, its causes and practical solutions through stimulating informed debate about and research into obesity. TOAST has also developed a range of supportive services including a helpline and training packages designed to advice and support those affected by obesity. TOAST felt that not enough action was being taken to address these issues and TOAST wanted the opportunity to put pressure both on politicians and officials to find practical solutions.
Our Strategy

Whitehouse Consultancy initially sought to raise TOAST's profile in and around Westminster with key officials and Parliamentarians. Through targeted meeting programmes and annual receptions in the Houses of Parliament we ensured that TOAST had face to face contact with the people who matter. We have also assisted in the tabling of Early Day Motions and numerous parliamentary questions which have been most successful in garnering cross-party support and proved invaluable in further increasing TOAST’s support base.

As a result of their sustained acitivty, TOAST can now count on cross-party support from Members of Parliament and as such have been mentioned numerous times on the floor of both Houses of Parliament. They are also regular participants at meetings of the All-Party Parliamentary Group on Obesity and have contributed to the Department of Health’s ‘Choosing Health’ consultations and the ongoing National Institute for Clinical Excellence Guidelines on Obesity. These have ensured that their message has been spread as widely as possible amongst the key decision makers and Parliamentarians in the field.
Outcome

Through their presence and efforts in and around Westminster, TOAST now command a high profile and are widely recognised as one of the leading players in the debate on obesity. TOAST has also acquired a number of high profile Parliamentary patrons from the health field, who are all invaluable in maintaining TOAST's momentum in their future work programme. TOAST has been extremely successful in raising obesity in the political arena and together with other lobbyists played a major role in the initiation of the House of Commons Health Select Committee inquiry into Obesity to which TOAST gave both oral and written evidence. Thanks to TOAST obesity is now firmly placed high upon the public policy agenda.[22]

In 2001, while directors of both TOAST and Lighterlife, Bar Hewlett and Jacqueline Cox gave evidence to the National Institute for Clinical Excellence(NICE) on the use of Orlistat the obesity drug. [23] Orliostat is a drug recommended by the National Obesity Forum. [24]