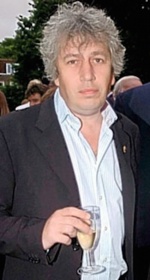 Roderick 'Rod' E. L. Liddle (b. 1960) is a journalist for The Times and The Spectator and a leading proponent of Eurabia. He formerly served as editor of BBC Radio 4's Today programme. After leaving the BBC, Liddle was hired by Boris Johnson as an associate editor of The Spectator. According to Media Guardian, Russian tycoon Alexander Lebedev is considering hiring Liddle as editor should he succeed in his bid to buy the Independent [1][2] (It is not clear however how the paper's environmentally conscious image would be reconciled with a climate change skeptic at its helm). [3]

Immigration Is a timebomb

In 2005 Liddle produced a documentary for Channel 4's Dispatches which harped on the Eurabia theme. The documentary's tendentious claims and in particular its giving a platform to BNP leader Nick Griffin drew many complaints.[4]

Rod Liddle has penned a glowing review of Christopher Caldwell's Islamophobic book Reflections on the Revolution in Europe: Can Europe be the same with different people in it?, calling it 'scabrous and excellent'. After endorsing Caldwell's thesis of a demographic threat -- 'Muslim majority is possible in some European countries within the next 50 years...you will see the advent of Eurabia' -- Liddle adds this observation:

...it would be nice if the incomers sort of liked us and didn’t find almost everything about our culture—equality for women, freedom of speech, rights for homosexuals, freedom of conscience—repulsive.

Liddle then proffers a quote allegedly from the Qur'an: 'kill the one who is doing it and the one to whom it is being done'. (There is no such quote). He also offers this insight: 'Muslim incomers to Great Britain have values very similar to the British lower classes of 1,500 years ago'. Liddle also laments ' the painstaking care with which the Western countries have ensured they pick the very worst, most dangerous Muslims to whom they will pay welfare benefits to and later, as a form of thanks, be blown to smithereens by.'[5]

'Islam is the problem'

In an article for the Spectator, Liddle pronounced:

Islam is the real problem -- the ideology rather than simply facets of the ideology or rogue individual adherents. And further, that there is no great philosophical divide between those whom our governments delineate as 'moderate' and those whom they consider 'extremist'. In each case, Islam as a belief system takes precedence over national law and international treaty, and quite clearly does so without argument.

He then goes on to highlight the 'admirable' aspect of Malaysia but suggests that this has happened in spite of Muslims,

You might argue that the sizeable and economically crucial Buddhist and Christian communities (totalling about one-third of the population) have mitigated the more extreme tendencies of Islam; on the other hand, you could also argue that Malaysia has simply been well run, full stop.

Before deliberately quoting a passage from Qur'an about a specific historical event, Liddle writes,

that 'the totalitarian nature of the ideology does not differ very much; the motor for each transgression of human rights, major or minor, comes from within Islam itself.'[6]

So extreme are his views that James Brandon, formerly of the neoconservative Centre for Social Cohesion, felt obliged to list him as one of the leading 'preachers of hate', one of the right's 'non-violent extremists' who has 'routinely demonised Muslims collectively'. He accused Liddle of 'dangerously blurring the lines between Muslims, Islam and Islamism'.

Rod Liddle, for example, wrote that "Islam is largely to blame for the viciousness which is periodically unleashed upon us all in the form of bombings – that it is the credo, rather than the individual, which is principally to blame". On another occasion, he said that "Islam is masochistic, homophobic and a totalitarian regime. It is a fascistic, bigoted and medieval religion." [7].

In a December 2009 post on his Spectator blog, Liddle posted a link to a report about an attempted murder by two Afro-Caribbean teens. He then writes:

It could be an anomaly, of course. But it isn’t. The overwhelming majority of street crime, knife crime, gun crime, robbery and crimes of sexual violence in London is carried out by young men from the African-Caribbean community. In return, we have rap music, goat curry and a far more vibrant and diverse understanding of cultures which were once alien to us. For which, many thanks.[8]

This sparked a furious response among others from his own Spectator colleague Alex Massie who threatened to resign. Massie called his comments 'tired, stale prejudice you can find in thousands of boozers across the country! Or at any BNP meeting, for that matter.' He added that 'like his comrades Clarkson and Littlejohn Liddle confuses being offensive with being provocative'. After refuting the dubious facts of Liddle's claims, Massie questioned the suggestion

that blackness is somehow the cause of these problems that is shameful. Worse than even that, mind you, is [Liddle's] insinuation that if only we could send Black Britons back to Africa and the Caribbean we wouldn't have any of these problems because, you know, it's all the fault of "multi-culturalism"...I'd also suggest that comparing offending rates between black graduates and those who fail to even sit, let alone pass, their A-Levels might reveal that class, educational achievement and any number of other factors might have a little more to do with crime rates than pigmentation.[9]

Diane Abbott, MP was likewise outraged: "We have all got so used to Rod Liddle's low-level racism that it has lost the power to shock."[11]