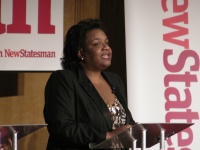 Diane Abbott is a British Labour Party politician who has been the MP for Stoke Newington and Hackney East since 1987. When Abbott won her local constituency election in 1987 she made history by becoming the first black woman ever elected to the British Parliament. [1]

In 2010 she was appointed shadow minister for public health [1] but was removed in a shadow Cabinet reshuffle three years later.