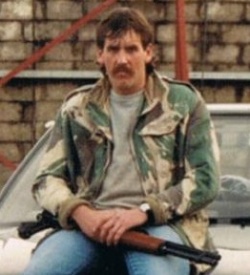 Campbell Smith in Fermanagh in the late 1980s

Philip Campbell Smith was identified by a Sunday Herald investigation as a former member of the British Army's Force Research Unit (FRU) who served under Gordon Kerr in Northern Ireland.[1]

Smith was identified by the Sunday Herald as being the author of a book on the FRU's activities in Northern Ireland, Fishers of Men, which was published under the pseudonym Rob Lewis.[2]

The book was published in September 1999. Smith/Lewis states on its Amazon product page:

For the record, Fishers Of Men was due to be published in August. The Ministry Of Defence saw fit to threaten injunction over certain content which had to be removed prior to launch. Hence the delay.[3]

In May 2000, The Observer's Henry McDonald reported that "Rob Lewis" (Smith's reported pseudonym) had been questioned by RUC and Metropolitan Police officers about leaks by Martin Ingram about the top FRU agent in the IRA codenamed 'Stakeknife':

It is understood that several fellow FRU members who worked with Ingrams in Northern Ireland have agreed to testify against him. A number of FRU soldiers have been questioned about Ingrams including the author Rob Lewis (not his real name).[4]

In November 2000, Smith was arrested by detectives working on Sir John Stevens' inquiry into collusion in Northern Ireland. According to the Sunday Herald, he was accused of intimidating witnesses:

Ingram has voluntarily co-operated with the Stevens inquiry by giving a detailed statement about the covert activities of the FRU in Ulster. Smith allegedly threatened Ingram by sending e-mails revealing his address. This could have led to republicans trying to kill Ingram.[5]

The Press Association reported that Smith was due to appear at an English Magistrates Court on 8 December 2000:

A spokeswoman for the Stevens Inquiry said: "He is charged under Section 51 of the Criminal Justice and Public Order Act 1994 with intimidation of witnesses on September 30 in London and other places."

She added that the charge related to the sending of an e-mail about a former soldier to a national Sunday newspaper.[6]

According to Smith, the case was dropped by the Director of Public Prosecutions for lack of evidence.[7]

Brookmans was hired to provide security to celebrity Kerry Katona after a break-in at her home in July 2007, according to the Northampton Chronicle and Echo:

The 26-year-old star has instructed the company to "do whatever it takes" to make her home impenetrable to intruders.

Operations director Phil Smith said: "The company is looking after the interests of Ms Katona and her husband. We're a comprehensive security and investigations company. We have a lot of experience working with high-profile clients." Mr Freeman added: "We've done some work with Max Clifford and some of his clients in the past, and that's how it started.

"We've looked at the property and recommended some defences and reinforcements to it already. There will also be other arrangements regarding her personal security and that of her family." He was reluctant to disclose exactly what modifications the company will make to the house, but these are thought to include covert cameras and sensors both inside and out, costing thousands of pounds.

Smith allegedly hacked into Ian Hurst's computer in July 2006 by sending him a trojan virus which relayed his emails. The hack is alleged to have been commissioned by Alex Marunchak, then a senior editor at the News of the World under Andy Coulson, and subcontracted to Smith through Southern Investigations, the company run by Jonathan Rees. The material reportedly accessed included information on the whereabouts of informants Kevin Fulton and Freddie Scappaticci.[10]

Hurst later confronted Smith and taped him apparently admitting to the hacking.[10]

At a meeting with SOCA detectives in May 2011, Ian Hurst claimed that Smith had cultivated contacts with Special Branch officers.[11]

As of November 2009, Smith was Operations Director (Land Based Services) for Elite Maritime Protection Services, according to the company's website, which carried the following short profile:

Phil built up his unique knowledge and experience of security issues during the latter part of his military career. He served in two specialist intelligence units that operated in covert surveillance and human source-handling roles in a hostile environment.

This hands on experience in surveillance, investigations and close protection has enabled him to successfully handle scores of high risk and high profile security operations worldwide.[12][13]

Campbell Smith was one of four private investigators convicted and sentenced in February 2012 for committing fraud by false representation, under offences which were introduced in the 2006 Fraud Act. SOCA Director General Trevor Pearce later stated:

Philip Campbell Smith, Adam Spears and Graham Freeman used the services of Daniel Summers, an expert in a technique known as blagging, to acquire personal and financial information on behalf of corporate clients and private individuals. SOCA's investigation into the four men began when it received intelligence that Summers' computer may have had information about criminal activity stored on it. When Summers put his computer up for sale, an undercover SOCA officer succeeded in buying it from him for £590 cash. Following the seizure of a number of computers, SOCA's forensic analysts retrieved files showing that Philip Campbell Smith, Adam Speers and Graham Freeman has been tasking a fourth person, Daniel Summers, to obtain confidential information for payment.[15]