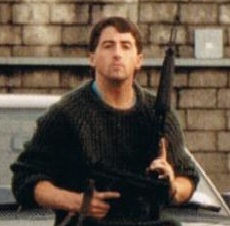 Ian Hurst is a former British Army soldier. He served in the Intelligence Corps and in the Force Research Unit. Under the pseudonym Martin Ingram he publicised claims that Freddie Scappaticci was an IRA informer codenamed Stakeknife.[1]

Hurst joined the army as a private soldier in 1980. He completed his Intelligence Corps training the following year and was promoted to lance corporal.[2]

He was posted to Northern Ireland in late 1981 and worked in the special collation team which was transferring intelligence material on to the then newly introduced computer database.[2] According to the Sunday Times the unit was known as 3SCT and the database was Crucible.[3][4]

After three months he moved to 121 Intelligence Section at Head Quarters Northern Ireland (HQNI), where he worked as a collator.[2] According to the Sunday Times, he was involved in producing intelligence reports for Major-General James Glover in this role.

The Sunday Times also claimed that at both 3CST and 121 Section, Ingram/Hurst had access to RUC, MI5 and MI6 intelligence as well as Military Intelligence Source Reports.[3]

In late 1987, he was posted to the FRU in Northern Ireland as an agent handler. he served in this role for just under three years.[2]

His final posting was as a collator in the Defence Intelligence Staff in the Ministry of Defence. he left the Army in 1991.[2]

According to Hurst, he decided to write a book in 1997, "to highlight aspects of my service which had a genuine public interest".[5] He subsequently surfaced in the media under the pseudonym Martin Ingram.[6]

The first Martin Ingram articles by journalist Liam Clarke appeared in the Sunday Times in August 1999.[3] The paper stated that Ingram/Hurst "approached the Sunday Times because of his anger at what he believed were misleading television reports of FRU activity in the wake of the case of Brian Nelson, a former soldier who infiltrated the Ulster Defence Association.[4]

According to Liam Clarke:

The alarm bells started to ring at Whitehall after we published an article on August 1 in which Ingram described how FRU, a section of military intelligence responsible for the handling of agents within loyalist and republican paramilitaries, allowed an attack on Gerry Adams to go ahead but doctored the bullets to increase his chances of survival.[7]

Ingram/Hurst claimed to be aware of a high-ranking army agent in the IRA:

Martin Ingram was on night shift at the British military intelligence headquarters in Northern Ireland when one of the phones rang. It was the hotline - a number known only to and reserved for Britain's most cherished agent, a man known by the codename Steak Knife.

Steak Knife was and is the crown jewel of British intelligence in Ulster, a man at the heart of the IRA's war effort who had to be kept happy at all costs. His source reports were read by ministers. His output was, and remains, so prolific that two handlers and four collators work full-time on them.[3]

The initial 8 August 1999 stories also claimed that MI5 had an agent network in the Gardai Siochana:

"MI5's best man was a senior member of the gardai who was codenamed 'Eamon'. He frequently met his handlers in Dublin airport," said the soldier, who asked to use the pseudonym Martin Ingram. "MI5's main targets appeared to be gardai and they weren't particularly hard targets to crack because they were basically law-and-order people opposed to the IRA."[4]

The Sunday Times stated that Ingram/Hurst "ruled out the possibility that meetings between MI5 officers and gardai could have been a legitimate exchange of intelligence".[4]

According to the Sunday Times, Ingram Hurst claimed that "a leading Sinn Fein figure was on the MI5 payroll, providing a steady stream of internal policy documents and reports on republican thinking on the move into politics after the 1981 hunger strike."[3]

In a Sunday Times story by Liam Clarke, published on 22 August 1999, Ingram/Hurst claimed to have known IRA informer Frank Hegarty as 'agent 3018'.

About a year into his [Hegarty's] new life, the Force Research Unit took over his case. The FRU had been set up to streamline agent handling as a result of an intelligence review in the wake of the massacre of 18 soldiers in an IRA gun and bomb attack at Narrow Water, Co Down, on August 27, 1979.
The FRU north detachment set up a "research office" in Derry, at Ebrington barracks, with eight handlers, six support staff and an generous budget. All that was missing was agents with real access to the IRA. "We needed RUC permission to proposition new people and that was generally refused, so we started looking back over the lists of people who had been in contact with the army before, some of them went back to 1969," said Ingram, who served in Ebrington from 1981 until 1985.[8]

McGuinness called the house to reassure his mother that her son was happy. He said he was at that very moment eating a Chinese carry-out and watching television in Donegal. "Don't worry," he said. "I will bring him home to you."
The next Mrs Hegarty heard of her son was when the police called to say that his body had been found.
To this day his mother and sisters refuse to believe he was an agent. They maintain that he had been made a fall guy to protect some higher-level informer.[8]

In the same edition, Clarke stated that in the wake of previous stories, the Ministry of Defence threatened injunctions and demanded the disclosure of notes, through the Treasury Solicitor's Department, so that "In the end we agreed to submit this week's article in order to avoid a court battle that could have delayed further publication indefinitely."[9]

In a third article, Clarke stated: "The letter of August 12 to The Sunday Times made it clear that British military intelligence does not believe the ceasefires are solid. It said: "The recent murders of Eamon Collins and Charlie Bennett, and the attempted murder of Martin McGartland demonstrate that terrorist groups are still targeting those that they believe to be informers." All those mentioned as being murdered or attacked were associated with the Provisional IRA and had not fallen foul of any other paramilitary group.[10] ugging In a November 1999 Sunday Times article, Ingram/Hurst reported that the local FRU commander in Derry, alleged to be John Tobias, had decided against bugging guns controlled by Hegarty:

"The reason they didn't jark it was because they would have had to involve the RUC to do that. There was a problem at that time, given the critical stage of 3018's (Hegarty's) development. If the weapons had been jarked, 3018's security would have been affected. He might not necessarily have been discovered, but his security and therefore his potential as an agent, not just in Derry but potentially in the IRA's northern command, would have been compromised."[11]

Ingram/Hurst claimed that a fire at the headquarters of the Stevens Inquiry on 10 January 1990, was set, not by 14th Intelligence Company but by a Covert Methods of Entry team from the Intelligence Corps Headquarters at Ashford in Kent.[11]

On 28 November 1999, Liam Clarke reported that "Geoff Hoon, the defence secretary, obtained an injunction on Thursday that banned publication of any information from Ingram. His lawyers argued that Ingram had "a duty of confidence/secrecy to the crown".[12]

In an article in the Sunday Times on 5 December 1999, Ingram/Hurst stated: " I would suggest that a peace and reconciliation commission, similar to the Truth Commission in South Africa, be established to investigate events in the 32 counties."[13]

In November 1999, the Sunday Times reported Ingram/Hurst's claim that much Army intelligence came from technical rather than human sources:

One long-running tech attack, which has never come to light, was on the home of Gerard Harte, the IRA's Mid-Tyrone commander. The device was planted and monitored by 14 Coy, the elite surveillance unit, on behalf of the RUC and MI5. According to Martin Ingram and another Intelligence Corps member who has spoken to The Sunday Times, it led directly two SAS ambushes that claimed the lives of 11 IRA members.[14]

The story also claimed that technical surveillance had been mounted on nationalist politicians Gerry Adams and John Hume and that Northern Ireland Secretary Mo Mowlam had ordered surveillance stopped against talks participants including Gerry Kelly.[14]

On 25 November 2009, the Belfast Telegraph reported that Ingrams claims had sparked a police inquiry:

The new Metropolitan Police investigation centres on whether the information Ingrams gave to the Sunday Times is in breach of the Official Secrets Act.
An investigation into the fire, conducted by the RUC, was inconclusive. It is understood that officers feel there is presently no evidence on which to base a new investigation.
However, if Ingram's information is correct, the Scotland Yard investigation has the potential to cast up information that could force the case to be reopened.[15]

Following a series of articles in The Times in 1999, Hurst was arrested by Special Branch police officers in connection with alleged breaches of the Official Secrets Act. He was not charged but was subject to an injunction.[5] The Press Association reported that a soldier had been arrested on 17 December 1999, by police officers investigating Ingram, but could not confirm the identity of the man detained.[16]

Sir John Stevens reportedly ordered an investigation of his allegations about the 1990 fire on 19 March 2000.[17]

On 2 April 2000, Liam Clarke claimed that the Ministry of Defence had received papers stolen from a man accused of being Ingram.

The papers, allegedly stolen in the break-in on February 1, were used to confront the ex-soldier by the defence ministry about a fortnight later.
The MoD told the soldier's lawyers that the papers had been delivered to it anonymously. It then demanded to see a memoir it believed the soldier had written. The papers belonged to a former member of military intelligence.[18]

Hurst was allegedly hacked by private detective Philip Campbell Smith on behalf of the News of the World in the summer of 2006.[5] [19]

I now cannot recall whether I opened an email from a bogus address in 2006. However, I can say that ~ would have been much more likely to have opened an email that had come from a trusted contact rather than an unfamiliar or unknown name. I do know that an email was sent to me by a trusted media contact within Times Newspapers Ltd around the time the Trojan became active and was collecting information from my computer. I have recently seen evidence that this individual was in email contact with X regarding my activities during these months, something which had previously been denied.[5]

The 'X' referred to was Philip Campbell Smith.[19]

The police first became aware that Hurst's computer had been compromised during an arrest in 2007.[5]

The police allegedly obtained further information about the hacking of Hurst's computer following the arrest of Philip Campbell Smith in 2009.[5] [19]

According to the The Guardian:

MI5 became aware that Smith had targeted Hurst's email in an attempt to find the location of Scappaticci. They made no approach to Hurst, apparently on the grounds that he was preparing to write an unauthorised book about his experience in Northern Ireland and could not be trusted. They may have taken steps to alert Scappaticci. They then asked the Serious Organised Crime Agency (Soca) to investigate.[19]

In late December 2010, Hurst was approached by Stephen Scott of Panorama with evidence that his computer had been hacked.[5]

Hurst subsequently confronted the alleged hacker in a meeting that was secretly filmed by Panorama. he told the Leveson Inquiry:

During the course of our meeting, X stated that he had placed a computer Trojan on my hard drive (by sending me an email from a bogus address which t then opened) and had, over a three month period, obtained all email traffic which was sent and received by me.[5]

At a meeting with SOCA detectives in May 2011, Hurst claimed that Philip Campbell Smith had cultivated contacts with Special Branch officers. He also claimed that there were police corruption issues with Operation Millipede.[20]

Hurst was not officially informed of the hacking of his computer by police until October 2011.[5]