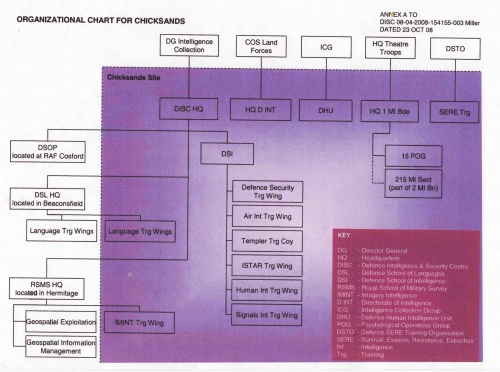 Organisational chart for Chicksands military base which houses the 15 (UK) Psychological Operations Group and the Defence Intelligence and Security Centre and various other intelligence bodies including the Intelligence Corps and the Joint Services Intelligence Organisation. The chart was released under the Freedom of Information Act in on 23 October 2008

Although the first proposals to create one came in 1905, the first Intelligence Corps was formed in 1914 and originally included only officers and their servants. The unit was rapidly run down after the First World War and was finally disbanded in 1929. On 19 July 1940 a new Intelligence Corps was created by Army Order 112 and has existed since that time. On 1 February 1985 the corps was officially declared an 'Arm' (combat support) instead of a 'Service' (rear support).[2]

Their headquarters, formerly at Maresfield, East Sussex and then Templer Barracks at Ashford, Kent, moved in 1997 to the former Royal Air Force station at Chicksands in Bedfordshire along with the Defence Intelligence and Security Centre and the Intelligence Corps Museum.

A report in The Guardian points to the Intelligence Corps being used to train Royal Ulster Constabulary in harsh interrogation techniques, which were tried out on interns who were suspected members of the IRA:

By 1957 Britain had set up an "intelligence research unit" at Maresfield in Sussex, and by 1962, SAS and paratroop units were being given training there to cope with capture. In April 1971, in conditions of great secrecy, a course in sensory deprivation was held at Maresfield for members of the Royal Ulster Constabulary. In the early morning of August 9 that year, the British army began its mass internment programme, arresting and imprisoning, without charges or courts, hundreds of suspected members of the IRA. Hidden within the mass internments was another programme, involving 14 prisoners, to test the new interrogation techniques.[3]

Since the Second World War, the Intelligence Corps has deployed with the British Army on all of its major deployments- Korea, Suez, Brunei, Indonesia, Dhofar, Northern Ireland, Falkland Islands, the Gulf, Africa and the Former Yugoslavia. In recognition of its meritorious service the Corps was declared an 'Arm' on February 1 1985. An 'Arm' is defined as those Corps whose role is to be in close combat with the enemy.[4]

The tri-service 15 Psychological Operations Group is also based at Chicksands and comes under the remit of the Intelligence Corps and 1 MI Brigade.

Members of the Intelligence Corps