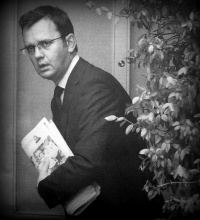 Andy Coulson is a journalist and media strategist who served as director of communications to Prime Minister David Cameron from May 2010 until his resignation on 21 January 2011. He is a former editor of the News of the World.

In 2005 Coulson was the editor of The News of the World when the Sunday newspaper was involved in a phone tapping scandal involving reporters hacking into the mobile phones of members of the Royal family. According to allegations published in the New York Times:

Andy Coulson, the top editor at the time, had imposed a hypercompetitive ethos, even by tabloid standards. One former reporter called it a “do whatever it takes” mentality. The reporter was one of two people who said Coulson was present during discussions about phone hacking. Coulson ultimately resigned but denied any knowledge of hacking[1].

In June, Coulson was found guilty of conspiracy to intercept voicemails and on July 4, 2014 he was sentenced 18 months in prison.[2]

Coulson was graded a category A prisoner and placed in Belmarsh, a high-security prison. Since the case, he has been downgraded to a category D prisoner [3] and been moved an open prison. [4]