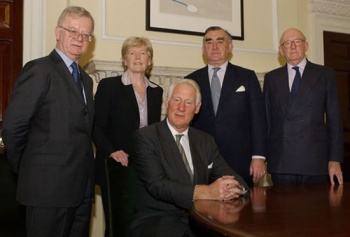 Peter Inge (born 5 August 1935) or the Rt Hon Field Marshal The Lord Inge, KG, GCB, DL - to give him his full title - was a member of the Butler Inquiry team, chaired by Robin Butler, that determined that the intelligence used to declare Iraq's possession of "Weapons of Mass Destruction" was flawed. He was a career soldier in the British Army between 1956 and 1997.

Lord Inge went on to work in the arms industry, notably with BAe Systems and as an adviser to the corporate spying firm Hakluyt. He is a former board chairman of mercenary firm Aegis Defense Services and before his retirement acted as an ad-hoc adviser to the King of Bahrain.

Inge was educated at Summer Fields and at Wrekin College, after which he attended RMA, Sandhurst. He married Letitia Marion Beryl Thornton-Berry in 1960 (2 daughters).

Career in the Army and in Parliament

Peter Inge was commissioned into the Green Howards from Sandhurst in 1956. He served with the 1st Battalion in Hong Kong, Germany and Libya. After working in the Ministry of Defence (MOD) he returned to the Battalion as a company commander, serving in Northern Ireland. From 1971 to 1972 he was Brigade Major with the 11th Armoured Brigade, before being appointed Commanding Officer of the 1st Battalion the Green Howards. He subsequently commanded the Staff College’s Junior Division, then Task Force C of the British Army of the Rhine (BAOR). In 1987 he was appointed Knight Commander of the Order of the Bath, promoted to Lieutenant General and continued to serve in Germany as Chief of Staff of I (British) Corps. He returned to Britain as GOC North Eastern District, based in York, then was appointed Director General, Logistics Policy (Army) at the MOD. In 1989 Sir Peter became the Commander of NATO’s Northern Army Group and Commander in Chief of BAOR. On his return to the UK in 1992 he became Chief of the General Staff and in 1994 the professional head of the British Army. On 15 March 1994 he was promoted to Field Marshal and became Chief of the Defence Staff. He served in the post until 1997, when he was created Baron Inge, of Richmond in the County of North Yorkshire. He was appointed as one of the 24 Knights of the Garter in 2002. In 2004 he was made a Privy Councillor and appointed to serve on the Butler Committee, which examined the use of intelligence during the Iraq War.

Peter Inge was one of the founders of a consultancy to promote the US candidate for the "new government" in Iraq, according to Intelligence Newsletter:

Now that Ahmed Chalabi is back in good odor in Washington (IOL 521), his lobbyists in the United Kingdom are paving the way for his return to London. Chalabi's prime adviser over the past five years, Claude Hankes Drielsma, has set up a consultancy, Global Strategy Ltd. in London. His two partners in the firm are Graham Barr, who was in charge of governmental relations at BP for 27 years, and Peter Anthony Inge, former chief of the defense staff in the United Kingdom. Incorporated in May of this year, Global Strategy is still dormant but it nonetheless seals an alliance between three men with experience in the Middle East and particularly in Iraq. A former merchant banker, Drielsma was head of the British branch of the German consultancy Roland Berger until last year. Along with Chalabi he had pressed actively in recent years for an inquiry into the United Nations oil for food program, buttonholing the American media and Congress on the issue.

For his part, Barr, who left BP in 2002, serves as chairman of Bell Pottinger Sans Frontieres (BPSF), the international branch of the Bell Pottinger communications agency founded by Tim Bell, former spokesman for Margaret Thatcher. BPSF has worked in Iraq since 2003. The firm was the main PR adviser to the interim Iraqi government and managed the campaign to prepare for elections in January of this year. Since then it has continued to advise the new Iraqi government.

Inge has a wide range of connections in Iraq. As the former defense chief, he was a member of the Butler Inquiry team, chaired by Robin Butler, Baron Butler of Brockwell, to examine British intelligence assessments prior to the war in Iraq.

Meanwhile, since 2003 - the year it was created, Lord Inge was and still is the non-executive chairman of Aegis Defence Services, a London-based company which acts as an interface in Iraq between the U.S. military and the numerous private security firms (mercenaries) operating in the country. Aegis was awarded a $293 million contract by the Pentagon in May 2004 to act as the "coordination and management hub" for the fifty-plus private security companies in Iraq. They also contributed seventy-five teams of eight armed civilians each to assist and protect the Project Management Office of the United States and provided protection for the Oil-for-Food Program inquiry. The CEO of Aegis is Lt. Col. Tim Spicer, a former officer of the SAS and a former CEO of Sandline International.

Up until last year Inge was equally a member of the Hakluyt Foundation, the supervisory board of the private British intelligence firm Hakluyt which is highly active in the Middle East.[1]

Inge was a member of a private seminar series which met between May 2006 and January 2008 and produced an article in the RUSI Journal called 'Risk, Threat and Security: The Case of the United Kingdom'. The article expressed concerns that the 'politicisation' of defence policy and a national 'lack of confidence' made the UK vulnerable to security threats. It suggested, therefore, the partial removal of defence policy from democratic control.

In assessing the supposed security threats to the UK, the article expressed a concern that the country was ‘soft’ and lacked a cohesive identity which made it vulnerable to enemies. It complained of a ‘lack of leadership from the majority which in misplaced deference to ‘multiculturalism’ [has] failed to lay down the line to immigrant communities’. [2]

It revealed that Lord Inge was paid £74,700 over four months from the London-based account, which was also used to funnel more than £100m into an offshore slush fund set up to make corrupt payments to middlemen and officials around the world. Inge admitted an "oversight" in failing to declare these fees to the House of Lords' Register of Interests.[3]

During an investigation by the Wall Street Journal into interests of members of the House of Lords in November 2014, Inge's assistant disclosed that Inge has an unpaid role advising the King of Bahrain. His assistant said the position it "totally unpaid, and since he has now retired to Yorkshire I think it highly unlikely his advice will be called for ever again."[4]