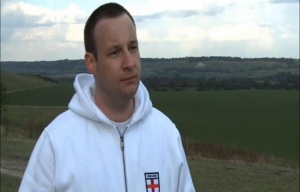 Paul Ray is a Counterjihad blogger who uses the name 'Lionheart'. He was originally known as Paul Cinato, which appears to be his real name, but went by the name Paul Andrews when he attempted to infiltrate the International Solidarity Movement.

Based in Dunstable, he claims to have been involved in establishing the English Defence League in nearby Luton in 2009.

According to Pamela Geller:

Paul-the brave 'Lionheart' was the Brit Christian Evangelical sleuth on the International Solidarity Movement 'bust" in Israel last summer written up on FrontPageMag.com.[1]

The original FrontPageMag story by Lee Kaplan appeared in September 2006, and claimed:

One of our volunteers in the United Kingdom for Stop the ISM managed to infiltrate the ISM late last June in the Holy Land where the ISM operates in direct support of terrorists. Our volunteer (who prefers to remain anonymous to avoid retaliatory attacks) has had prior experience going undercover for the police in the UK. The photos and intelligence he brought back are proving invaluable to intelligence agencies watching the ISM and have been in official hands for over a month prior to this publication.[2]

A statement by the International Solidarity Movement on this article and the accompanying photos stated:

The article accompanying the photos also claims that the fifth, unnamed foreigner with the obscured face in the photos went undercover in order to try and sabotage those, such as the ISM, who support Palestinian non-violent resistance.

At the time the photographs were taken, these individuals had not yet become ISM volunteers. They went to Jericho of their own volition without coordinating or discussing their plans with the International Solidarity Movement. They had not attended ISM’s mandatory intensive non-violence training and were new to the country. The fifth foreigner encouraged them to join him in the photographs and have their pictures taken holding guns. These individuals regrettably followed his advice.

We have discovered the real name of the fifth foreigner to be Paul Cinato from Britain, though he gave his surname as Andrews at the time.[3]

In February 2007, Paul Ray published an account of the episode on his Lionheart blog. The accompanying photos, in which his face was no longer obscured, made it clear that Paul Cinato and Paul Ray were the same person.[4]

In July 2007, counterjihad blogger Aeneas Lavinium left a post on Ray's blog inviting him to join the Center for Vigilant Freedom/910 Group.[6]

On 3 January 2008, Bedfordshire Police emailed Ray seeking to arrest him for inciting racial hatred.[7] In a post the following day, Ray stated that he was "currently in America".[8]

According to Ray's blog, his legal representative in the case was Anthony Bennett.[9]

As a result of this episode, Ray was interviewed by Phyllis Chesler.[10]

On 29 January, Ned May of the US counterjihad blog Gates of Vienna stated that Ray was in the United States:

Now that the information is publicly available, I can reveal what Dymphna and I have known for a while: Lionheart is currently here in the USA.

He’s in good hands. People are looking after him, and he’s considering the possibility of asking for asylum in this country, since he faces arrest for political reasons (i.e. for “stirring up racial hatred”) if he returns to England. It’s possible that a legal fund will be set up to help him, but I don’t have any definite word on that yet.[11]

Later comments about "the founder of the EDL" by May's wife Dymphna may refer to Ray's presence in the US in this period:

Back before the EDL, when he hid out here in the US (a few years back), the Baron and I supported him financially (we wuz "rich" then --i.e., full-time work). In addition, a fellow blogger gave him a condo to live in, rent free. On a golf course, no less![12]

In February 2008,the Luton and Dunstable Express reported that Ray was in South Carolina.[13] He then returned to the UK and was arrested and bailed in March 2008.[14]

Ray was interviewed by the Christian Broadcast Network for a documentary, aired on 24 July 28, which claimed that multiculturalism was allowing radical Islam to flourish in Britain.[15]

Tension rose in Luton after a protest by al-Muhajiroun at a homecoming parade of the Royal Anglian Regiment on 10 March 2009. Ray was involved in attempts to organise a counter-demonstration in the following weeks along with March for England and the United British Alliance.[16]

Events in Luton formed the backdrop to the formation of the English Defence League. Ray later told Adrian Morgan of Family Security Matters:

2) The original EDL was instigated by myself coming together with members of UPL (United People of Luton) and other anti-Jihad activists around the country who had finally had enough of the danger posed to our local communities and the country as a whole. The name was taken, as an English equivalent of the Welsh Defence League that was already in place after someone came to me, knowing my intentions, and posed the question “what about setting up an English Defence League?”

I agreed and things went from there and the group was formed. The original English Defence League was born in Luton by the people of Luton. It was initially formed in direct response to the Moslem anti-war protest by Al Muhajiroun in Luton due to the fact that a section of the local community had finally had enough of the militancy within their town and wanted action taken by the police and local government.[17]

Differences within the EDL

By August 2009, Ray had fallen out with the EDL leadership according to The Times:

Paul Ray, who claims to be one of the founding members of the League, says that the group has been taken over by a cabal of extremists including Chris Renton, whose name appears on the list of BNP members leaked last year.[18]

Ray struck a conciliatory note towards Tommy Robinson's leadership of the EDL, in his September 2009 interview with Adrian Morgan:

I am no longer an active participant of the current movement on the streets, but support the leadership of “Tommy Robinson” 100 percent. I have now set up my own branch of the EDL that comes under its own leadership structure called the St George division.[19]

Searchlight suggests that Ray was responsible for a YouTube video which exposed "Tommy Robinson"s real identity, as Stephen Yaxley-Lennon in 2010.[20]

Lionheart (Still active as of October 2015, but mostly postings of relevant press articles rather than commentary)