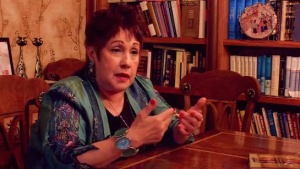 Professor Phyllis Chesler is a psychotherapist and author, who is currently a Shillman-Ginsburg Fellow at the Middle East Forum.

A private philanthropist and the Middle East Forum Education Fund have committed to fund a bit more than 50 per cent of my $110K annual operating costs.

In January 2008, Chesler wrote a supportive article about counterjihad British blogger Paul Ray after he was accused of inciting racial hatred. Chesler wrote an update to the article, after Ray's pro-BNP views were made known to her.

I myself no longer demand purity or conformity in my political alliances. I think we are at war and we must make alliances with people with whom we may not agree on every issue. However, others believe that there are some people who, no matter what, are “off-limits” where civilized political and military alliances are concerned.[1]

According to Richard Bartholomew, Chesler repudiated Ray in a subsequent update.[2] The original post is no longer online and this version does not appear to have been archived.

'Muslims and Arabs taking over Britannia'

1n March 2016 after a trip to the UK Chesler pondered in her regular op-ed page in the Israel National Daily how long it would be until the 'Muslims and Arabs would rule Britannia'. Her recounted a meeting with an Oxford academic who expressed sympathy with an English Defence League protest over child grooming in the city:

A professor from Oxford comes down to visit me. She tells me about the 'Asian (Pakistani) grooming gangs' in Oxford and about how 378 very young Caucasian infidel girls were pimped out by these gangs in Oxford alone.

'Finally, after many years, the pimps were arrested and sentenced and the failure of the police to stop them was excoriated in open court. The English Defense League mounted a brave, civil rights protest right in front of the police station. The police cordoned them off, surrounded them with barking dogs and a line of police officers who let no one near enough to hear what they had to say. And then they loosed the Anti-Fascist League against them who came rushing down the street, hollering "Nazi, fascist scum." [3]

Chesler has written 16 books as of 2016. Her latest books are An American bride in Kabul, (Palgrave Macmillan) and Living history: on the front lines for Israel and the Jews. Others include Women and madness, Woman's inhumanity to woman, and The New Anti-Semitism.

She has written four studies about honor killing.