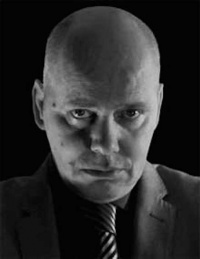 Adrian Morgan is a British-based writer and artist.[1] He is a contributing editor of Family Security Matters[2] He formerly maintained a blog named Western Resistance, under the nom de plume Giraldus Cambrensis.[3]

I am slightly ambivalent about the British National Party, on account of its racist past. Nowadays, under the leadership of Nick Griffin, a skilled politician, the racist agenda has become replaced by an agenda which is highly focused against Islam. With this aspect of its policies, I am in agreement. Islam poses a more serious threat to every aspect of British democracy than anything previously encountered.[5]

He went on to add:

The latest ploy of the BNP, which I have to say I personally support, is to reproduce the controversial Mohammed cartoons in leaflets. The left-wing Guardian, reports on the development with an air of faux moralism, quoting a spokesman from the leftist group Searchlight, who says: "Everywhere the BNP appears racist attacks increase and this leaflet will make it more difficult for Muslims and others to go about their day to day business without being threatened and intimidated."

Perhaps if British Muslims were less prepared to support calls for those who criticize Islam to be threatened and intimidated into total silence, there would be no need for the BNP, or any other group, to highlight the negative side of the agenda of Islam.[6]

Morgan has stated in reference to Spinwatch's reporting of this statement:

Yes - I did naively state in 2006 that I was ambivalent about the BNP because at that time they had (announced that they had) abandoned their racist views, but history proved me wrong and they showed themselves to be no different than they always were The word ambivalent means what it says, despite the "spin" and sleight of hand employed by your reporter.[7]

According to Searchlight magazine, the BNP's Alan Goodacre stated his intention in 2007 to seek Morgan's help as part of his project to shift the party from anti-semitism to Islamophobia.[8] According to Morgan, the BNP attempted to recruit him, but he rejected the offer.[9]

Morgan was at one stage a contributor to Dominic Whiteman's Westminster Journal. He ended his association after Whiteman posted attack pieces against the blogger Tim Ireland. He sent a statement to another blogger Richard Bartholomew stating:

Yesterday you placed an “update” to an article, in which you mention that I was listed as “Current Affairs Editor” of Westminster Journal.

I had done nothing in that capacity since August 2008.

You will find now that my name has been removed from the “about” page.

I had nothing to do with the Tim Ireland article/attack, which I repudiate unreservedly. I do not know Tim Ireland and I have no cause to feel animosity towards him. In future I will not be asssociated with Westminster Journal while it is used as a vehicle for character attack and bile. [10]

Morgan was one of a number of people who attended an August 2009 meeting in London organised by Martin Mawyer of the Christian Action Network. In a comment at Jihad Watch, he attacked claims that Robert Spencer had met with the English Defence League at this event:

This "guilt by association" tactic, made by people who were not at the event, is insidious. I - on the other hand - did talk briefly with the EDL members, to try to find out what sort of people they were (rather than believing the hype put about on internet weblogs).

My conversation took place on a walkway beside one of the docks, with neither Robert Spencer nor Douglas Murray present. Does my talking to them make me a member of their group, in league with "forces of Evil"?[11]

In an email to Neocon Europe, Morgan stated:

I had not gone to Crossharbour to meet the EDL - I had been invited by an American Christian group who were making a documentary. I had been invited to give an interview. I was not aware that Robert Spencer, Douglas Murray, the EDL and others had also been invited. My encountering of the EDL was a surprise to me, and I did briefly ask a couple of questions because - unlike some purveyors of spin - I believe in trying to get to the truth behind a story.[12]