Westminster Journal is a right-wing anti-Muslim website run by Dominic Whiteman, the founder of the British terrorist research group Vigil.

The website was created on 16 June 2007. In explaining the reason for the website's creation, Dominic Whiteman refers to the need for a European publication which would comment on "the struggle against militant Islam." Whiteman explained that, "Westminster Journal seeks to expose these Islamists who lie and oil their way through to mainstream politics." [1] Whiteman's message attempted to distance the project from neoconservatism, commenting that, "The Islamist Right will not be faced down by the Free World's Political Right but by the mainstream; liberal, democratic, freedom-loving people...That is why I," Whiteman continued, "as a mainstream, liberal, political individual, am proud to accept the honour of being the Editor of Westminster Journal." [2]

Whiteman's claim to be a mainstream liberal is slightly undermined by a section on the website entitled "Traitor's Gate". This section is named after the water entrance to the Tower of London where prisoners would be taken into the Tower past the severed heads of recently executed prisoners. The webpage includes a paragraph openly stating that the journal is engaged in a witch hunt, and offering a novel interpretation of the cold war:

The Cold War was won by the side which best performed its witch hunt. Here the Westminster Journal seeks to perform a witch hunt but using 21st Century tools of evidence gathering and blatant proof. Sure we will be accused of McCarthyism. Well, someone's got to do it. Islamists who show two faces (Taqiyya) to further Islamist Totalitarian goals and Extremists who get in the way of solutions to the Struggle against Militant Islam need to be exposed. If you feel there are others who need to be added to either of these lists there is no time like the present to contact us, presenting your case backed up by waterproofed evidence. Our editorial body will review each case and - if genuine - we’ll send the guilty through Traitor’s Gate. [3] 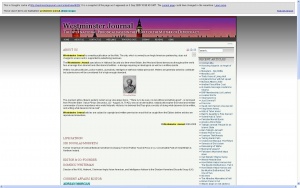 Westminster Journal About Us page, 3 September 2009

The following personnel were listed on the site's about page as of 16 September 2009[4]:

An earlier version of the page cached by google on 3 September 2009 also listed the following[5]:

Adrian Morgan ended his association with the Westminster Journal after Dominic Whiteman posted attack pieces against the blogger Tim Ireland. He sent a statement to another blogger Richard Bartholomew stating:

Yesterday you placed an “update” to an article, in which you mention that I was listed as “Current Affairs Editor” of Westminster Journal. I had done nothing in that capacity since August 2008.

You will find now that my name has been removed from the “about” page.

I had nothing to do with the Tim Ireland article/attack, which I repudiate unreservedly. I do not know Tim Ireland and I have no cause to feel animosity towards him. In future I will not be asssociated with Westminster Journal while it is used as a vehicle for character attack and bile. [6]