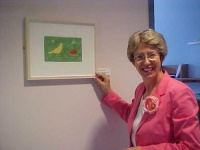 Patricia Hewitt (born 02 December 1948, Canberra) is a senior adviser at FTI Consulting and former health secretary in the UK Government.

In the Dispatches programme ‘Politicians for Hire’, broadcast on 22 March 2010, Dispatches set up a fictional US public affairs company and contacted Hewitt and several senior politicians asking them if they were interested in a position on the advisory board in their London office. Hewitt attended a bogus interview and outlined to the undercover reporter five ways in which corporations could gain access to a serving Minister of State:

“You know when I was Business Secretary I would cheerfully accept hospitality initiations, for instance, because it was just a really useful way of getting to know business leaders rather better. Gordon is pretty against all of that.”

“Now the think tank and the seminar route I think is a very good one and will remain a good one and so identifying the right think-tank. Policy Exchange is a good one at the moment, Demos is another good one. And saying ok, does that think tank already have a relationship with Minister X? Can we invite Minister X to give a seminar on this subject? Your client would then sponsor the seminar and you do it via the think-tank. And that’s very useful, because what you get for your sponsorship is basically you sit next to the Minister.”

“Is a classic one, increasingly crowded for the Conservatives at the moment. A bit un-crowded for Labour last year, it used to be the reverse.”

“Sometimes you know just a direct invitation to have you know we want to come and see you about X will sometimes work.”

(5) Establish a presence in the Minister’s constituency

“So depending on the company if they’ve got a presence in some part of the country or there’s some link and then that fits with where roughly speaking where a Minister’s constituency is … that can be a more subtle route in … and doesn’t get trapped by the officials.” [2]

In December 2014 it was announced Hewitt had joined FTI Consulting as a senior adviser, where she will work under UK head of public affairs and managing director Alex Deane.[3] FTI are hoping to utilise her experience as a Minister, policy adviser and company director as they look to expand their 'public affairs offering in the UK'.[4]

Hewitt has donated £4,000 to Liz Kendall's campaign to succeed Ed Miliband as the next leader of the Labour Party.[5]