On the incorporation of Market House on 5 November 2003, Helen Disney was listed as its director and former Times journalist, and director of Populus Rick Nye was listed as the company's secretary[3][4]. The company's original website published staff profiles of Disney alongside those of Nicole Gray Conchar and Sacha Kumaria.[5] 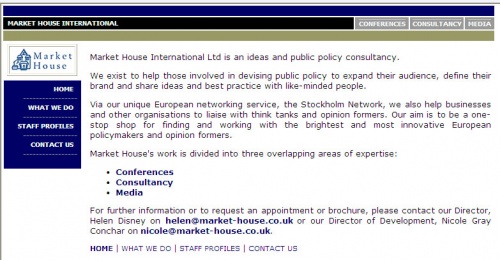 Paul Staines described the relationship between Market House International and Stockholm Network in a 2005 article for The Times:

The Stockholm Network, which presents itself as a pan-European think-tank co-ordinating body, turns out to be in fact the public face of Market House International, a PR consultancy that tells corporate clients that the network gives it "local capacity to deliver both local messages and locally tailored global messages in a wide range of countries"[7].

Sensing a lucrative business opportunity, PR consultancy Market House International (MHI) have recruited around 130 free-market European think tanks, including the Adam Smith Institute, into a coalition: the Stockholm Network. It offeres 'both local messages and locally-tailored global messages', backed by 'Europe's brightest policymakers and thinkers.' Many members of the network do not understand just how commercial it is. Sacha Kumaria, the network's director of programmes, admitted that it does take corporate funding, from Pfizer and others, but declined to say how much[8].

According to the Corporate Europe Observatory: 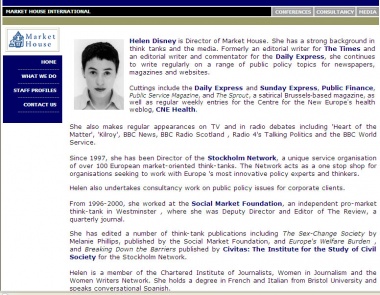