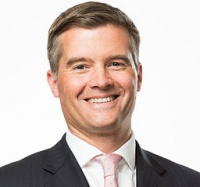 Mark James Harper (born 26 February 1970) is the Conservative Party Member of Parliament for Forest of Dean.

Harper served as the government's chief whip from May 2015 until July 2016 when Theresa May replaced him with David Cameron's former parliamentary private secretary Gavin Williamson.[1]

Harper is a noted Eurosceptic.

Blocking freedom of information requests on meetings with lobbyists

In 2012 Harper oversaw the Coalition's plans to introduce a lobbying register. Transparency campaigning group Spinwatch had engaged in a freedom of information battle with Harper since it first made an FOI request in August 2010 asking for details of his meetings with lobbyists to discuss lobbying transparency. [3]

Harper was born in Swindon, Wiltshire, he was educated at the Headlands Comprehensive School and Swindon College. He then studied philosophy, politics and economics at Brasenose College, Oxford, where like David Cameron he studied under Professor Vernon Bogdanor.[4]

On graduation in 1991 he joined KPMG as an auditor. After qualifying as a chartered accountant, in 1995 he joined Intel Corporation as a senior financial analyst, becoming the finance manager in 1997, and operations manager from 2000. In 2002 he left Intel to set up his own accountancy practice.

In opposition, Harper held the positions of Shadow Minister for Defence 2005-07; Work and Pensions (Disabled People) 2007-10; Parliamentary Secretary (Minister for Political and Constitutional Reform), Cabinet Office 2010-12. [5] From May 2010 he was Parliamentary Under-Secretary of State at the Cabinet Office, with ministerial responsibility for Political and Constitutional Reform.[6] In September 2012 he was appointed Immigration Minister. He resigned from the Government in February 2014, after it was revealed he had employed an illegal immigrant as a cleaner.[7]

In July 2014, Harper was appointed Minister of State at the Department for Work and Pensions.[8] Following the May 2015 general election, he became the Government Chief Whip.[9]

In February 2016, Harper came under pressure to take a stronger stand against fracking, and put the interests of his Forest of Dean constituents before his job as government chief whip [10]. In response, Harper argued that:

'Specifically with regard to hydraulic fracturing in the area, I have raised the concerns of local residents, and the local council, directly with ministers, and am currently awaiting a response. In the last three months, I have written over 1,000 letters to, or on behalf of, my constituents. I continue visit local organisations and local businesses, meet with local councillors, and hold surgeries in and around the constituency.'

Harper's constituency includes four oil and gas licence blocks, awarded to South Western Energy by the Oil and Gas Authority in the 14th licensing round in 2015. [11] However, on 14 September 2016, South Western announced it would give up these four license blocks for reasons of 'financial exposure'. Local anti fracking groups celebrated, saying public opposition had made any prospective exploration non-viable. [12]

Harper has voted against greater regulations on fracking, except on one occasion. [13]

Harper is a strong supporter of Israel and a member of Conservative Friends of Israel.