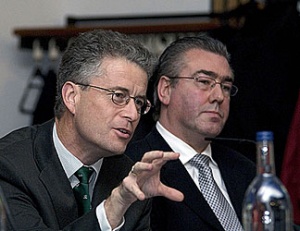 Mark Baird is an employee of Diageo based in Edinburgh he has held a variety of posts with the drinks giant, ranging from production, distribution and facilities management. He was responsible for rolling out Diageo’s employee responsibility programmes throughout the UK and Ireland. [1]. In in May 2007 Baird was seconded to the Scottish Executive to head the Partnership Agreement: Scottish Executive and the Alcohol Industry[2]. He is responsible for driving forward the partnership's initiatives and managing the programme. He works within the NHS alcohol misuse team and as programme director of He is pictures here (February 2008) with Robert Madelin, Director-General for Health and Consumer Protection, from the European Commission the pair were speaking at an event held as part of the Scotland Futures Forum project entitled, ‘Fresh Perspectives on Alcohol and Drugs’. Other alcohol industry leaders speaking at the event included Scotch Whisky Association Chief Executive Gavin Hewitt CMG, Wine & Spirit Trade Association Chief Executive Jeremy Beadles and Benet Slay, Managing Director of Diageo GB [3]

Baird declined an opportunity to be interviewed (by Claire Harkins for her masters dissertation) but he did offer to consider answering some questions if they were sent to him in advance. It took some weeks before the answers to six straightforward questions about his role within the executive and Diageo’s position on alcohol related harm were returned. The reason for the delay was the result of the internal structure of Diageo, before Baird could reply his responses had to be screened by the Diageo’s corporate strategy team in London; once they had checked Baird’s answers (and compiled part of the response), the Diageo legal team then checked over the answers given before they were returned. This inability of a senior member of Diageo’s Scottish team, seconded to the government in Scotland to work in public health, to independently respond to an interview of this nature does support a widely held observation regarding the alcohol industry. That is, the alcohol industry is phenomenally well organised and disciplined as an economic sector[4]. Even senior industry figures in Scotland cannot, or will not, speak on these issues independently. The questions and answers provided are detailed below.

Q1)Diageo is a company that takes social responsibility very seriously and have a number of projects which encourage responsible consumption of their products. How do you see your role in terms of reducing the negative consequences sometimes associated with alcohol consumption?

Diageo GB takes social responsibility very seriously. We are committed to working with partners like government, NGOs and The Drinkaware Trust to develop effective programmes aimed at improving the UK drinking culture for the better. These include responsible drinking advertising, a unit awareness campaign, alcohol education campaigns for those under the age of 18, bar server training, community safety publications, Summer road safety campaigns and sponsorship of Fife Constabulary Alcohol Liaison Officer’s vehicle.

Q2)Diageo’s involvement in the Scottish Executive’s partnership agreement with the alcohol industry shows your company’s commitment to working with partners. How useful is this forum and in what ways do you/ have you contributed to the Executive’s understanding of the industry in Scotland?

This is proving to be an effective forum with industry and government working in collaboration for the first time to jointly tackle alcohol harm and misuse in Scotland. We initially have 14 workstreams including; Scotland’s first National Alcohol Awareness Week in October, a Responsible Retailing Standards document published for Scotland; working with EventScotland to introduce responsible drinking and alcohol retailing initiatives at all of their events in Scotland; exploring the possibility of a multi faceted pilot programme in Fife, industry supporting the govt’s drink drive campaigns, working with the media to portray alcohol responsibly, developing alcohol education materials for parents to use with their kids; developing a set of alcohol Sponsorship in sport guidelines among others. Having an industry employee working alongside govt officials is helping the govt to understand industry views, perceptions and likely reactions in various areas of alcohol policy.

Q3)Please could you give details of other public officials whom you work closely with in Scotland and the UK, how do you cultivate these relationships within the relevant policy circles?

Diageo enters into regular dialogue and consultation processes with the following public bodies and departments in Scotland: constituency MSPs and councillors who represent the areas around our Scotch Whisky plants, Department of Health and Enterprise in Scotland. Within the UK, Diageo also engages with the Treasury, DfES, Home Office, DCMS, DoH, constituency MPs and also MEPs for European policy policy.

Diageo’s aim is to be the preferred partner with Government in the creation of public policy.

Q5)How do you respond to claims made by some health campaigners that controls at the population level, (for example, raising taxes and reducing availability of alcohol) are the only means to reduce alcohol related harm?

We take alcohol related harm extremely seriously. However we do believe that there are no simple solutions to the problems posed. Our focus is on the prevention of alcohol misuse by encouraging individuals to consume alcohol responsibly, rather than introducing controls at the population level. Last year we spent in excess of £2 million in Great Britain delivering a number of innovative programmes to promote responsible drinking. Specifically on taxes, the Government stated some time ago that excise duty was not an appropriate mechanism to achieve public health ends and we support that view.

The drinks industry is already subject to significant taxation on alcoholic products. We do not believe that increasing taxation will deal with irresponsible consumption. The best way for us to continue to promote responsible drinking is by effective self-regulation, responsible marketing and promoting of our brands and facilitating a shared understanding of responsible drinking.

Q6)Please could you give details of the work you do personally with the Scottish Executive?

I am Programme Director for the Scottish Govt & Alcohol Industry Partnership and in that role steer the activity of the Partnership and ensure that all the actions and outputs committed to across the agreed workstreams are delivered. I also on occasion, act as a conduit between the industry and govt, health bodies and ngo’s [5].