From Powerbase
(Redirected from Liz Truss)
Jump to: navigation, search 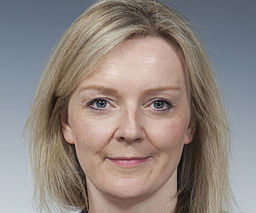 Elizabeth Truss is the UK Conservative Party MP for South West Norfolk and has been a government minister since 2012.

She was appointed as Secretary of State for Justice by incoming Prime Minister Theresa May on 14 July 2016. [1]

Previously, in David Cameron's July 2014 re-shuffle, Truss was appointed secretary of state at the Department for Environment, Food and Rural Affairs.[2]

Prior to that, she was parliamentary under-secretary in the Department for Education from 2012.[3]

Truss previously worked as deputy director at Reform, a think tank whose declared mission is 'to set out a better way to deliver public services and economic prosperity'. [4]

Two months after being appointed environment secretary in July 2014, Truss appeared before the Commons Environment, Food and Rural Affairs Select Committee. There she repeated the Coalition government's mantra that 'provided [fracking] is carried out in a responsible manner people can have confidence in it'. There was a need, she said to 'demystify' it.

We need to do a good job in explaining to the public. There can be misinformation out there. It is our job to explain. People need to understand the evidence behind policy', she said.

In June 2015 Truss attended lobbyists Westbourne Communications' summer party at the ICA in London. [6] Westbourne counts among its clients the controversial fracking firm Cuadrilla Resources, which a few weeks later suffered a blow to its shale exploration plans when Lancashire County Council rejected its applications at two sites in the region.

A freedom of information request revealed the cosy access enjoyed by Westbourne to Truss's own special adviser (Spad). As Spinwatch reported:

Emails released recently by Defra under freedom of information rules reveal that in May 2014 a Westbourne staffer wrote to Guy Robinson, who was at the time a special adviser to former environment secretary Owen Paterson (now Liz Truss), to request a meeting on ‘shale gas and farming’. The lobbyist, whose name is redacted but mentions North West Energy Task Force (NWETF) is a client, was ‘working on a research paper exploring the potential benefits of shale gas developments to farmers’. He/she wanted ‘to discuss some of the findings’ over ‘some lunch or a brief coffee’ ahead of a launch event.

Within hours Robinson had replied, asking the lobbyist to set up a meeting with his diary office. Unfortunately we have no way of knowing whether they met – the emails don’t give any dates in the secretariat’s reply, or indicate if they arranged it by phone. Nor is it listed on Defra's most recent disclosed spads’ meetings dated 30 June 2014.

Guy Robinson, as it turns out, is an ex-lobbyist himself – he once worked for Crosby Textor, the UK-Australian lobbying outfit co-owned by David Cameron’s infamous election spin doctor Lynton Crosby. [7]