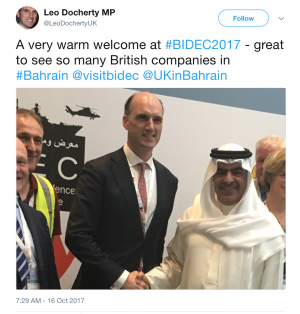 Leo Docherty is a former British Army veteran and the Conservative Party MP for Aldershot since 2016. He was selected to defend the safe Tory seat after MP Gerald Howarth retired. (In 2017 the party leadership rejected a request from local activists to consider Eurosceptic MEP Daniel Hannan instead.) [1]

Docherty is vice chairman and the former director of the Conservative Middle East Council (CMEC), where he provided the overall strategic direction.

He is a member of the UK House of Commons Defence Select Committee and is the nominated representative to attend Committees on Arms Export Controls meetings.

After graduating from The School of Oriental and African Studies (SOAS), University of London, Leo Docherty commissioned into the British Army in 2001. During six years of military service, Leo studied Arabic and deployed to southern Iraq during 2004-2005 where he was involved in training the Iraqi Army in Maysan Province, assisting in negotiations between warring tribes in Basra and providing security for the 2005 national elections. Leo has travelled extensively in the Middle East and Iran, including a seven-week bicycle ride between Europe and Jerusalem. Prior to joining CMEC Leo was employed as an Analyst and Country Manager for a leading Strategic Communication firm specializing in field research in conflict zones. [2]

In 2018 Docherty declared on the MPs register of interests that he had flown to Dubai in February to attend the World Government Summit, hosted by the United Arab Emirates.