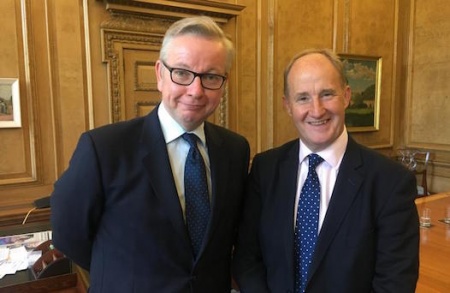 Kevin Hollinrake is the UK Conservative Party member of parliament for Thirsk and Malton. His constituency includes the picturesque countryside of the North York Moors and the Howardian Hills and the coastal resort of Filey. It also includes the controversial Kirby Misperton site run by oil and gas firm Third Energy .

A former estate agent, Hollinrake replaced the sitting MP Anne McIntosh to run for the rural North Yorkshire seat in the May 2015 general election. He won a majority of 19,456, and an overall 52.6 per cent of the vote. [1]

Hollinrake was appointed a parliamentary private secretary (PPS) to the new environment secretary Michael Gove after the 2017 snap general election. Before this, he was PPS to the Conservative leader of the House of Commons, David Lidington from 2016.

In June 2015 Hollinrake was appointed vice chair of the All Party Parliamentary Group on Unconventional Oil and Gas but stepped down in January 2016 following pressure from his constituents over this role and the group's funding from industry. [2]

Shortly after, Hollinrake set up and became chair of a new APPG, the All-Party Parliamentary Group on Shale Gas Regulation and Planning, which he claimed was self-funded. Its purpose is 'to recommend an effective regulation and planning regime should shale gas extraction take place'. [3]

The APPG on Shale gas regulation was not re-formed after the 2017 general election. [4]

Hollinrake's constituency includes 25 oil and gas licence blocks, more than any other constituency. The licenses were awarded to energy competencies by the Oil and Gas Authority under the 14th licensing round in 2015. [5] The licenses were shared between INEOS, Cuadrilla and Third Energy.

On 23 May 2016 North Yorkshire County Council's planning committee approved the Barclays-backed fracking firm Third Energy's application to explore for shale at Kirby Misperton, a small village in his constituency, despite overwhelming local opposition. [6]

Hollinrake has been strongly criticised by locals and environmental campaigners as not doing enough to oppose the shale gas industry.

'Serious concern' over plans to frack in North Yorkshire

Whilst campaigning ahead of the 2015 election Hollinrake had publicly stated that he 'would be first in a long line of local residents who would fight tooth and nail to prevent any attempt to produce shale gas in our area on an industrial scale', and that he was against fracking in general until questions over independent water monitoring and who was responsible for decommissioning/remedial action were answered, and safeguards were put in place against industrialisation of the countryside.[7]

SIx months later, on 16 December 2015, Hollinrake voted in favour of loosening regulations on fracking in protected areas and national parks. [8]

Shortly after fracking firm Third Energy submitted its application in May 2015 to drill a well at Kirby Misperton, Hollinrake requested they meet with him at his constituency offices. Afterwards he released this statement:

I have always said, that any proposal to hydraulically fracture for shale gas must be shown to be safe and discreet. Should North Yorkshire County Council approve the application, I will work to ensure that there is no significant impact on the lives and livelihoods of people in this area, where I, and my family, have lived all our lives. We need to make sure that the regulations are strong, and are monitored independently. In the meeting, it was agreed that Third Energy would allow the Environment Agency to supervise an independent contractor responsible for the monitoring of air and water quality throughout the whole process. This is a significant addition to the current regulations for shale gas exploration. I feel it is very important that the process is safe and is seen to be safe. I am also keen to meet regularly with the people of Kirby Misperton to see first hand the impact of this process on local peoples lives and reassure them that I am on their side.’

Third Energy today made a commitment that drilling sites need to be around six miles apart as a minimum and that each site needs to be no more than a few hectares in size. I would absolutely hold them to account for these commitments.’

... ‘I will be requesting a meeting with Amber Rudd, the secretary of state for energy and climate change to discuss these matters and my serious concerns for the health and wellbeing of local residents and the impact on our local countryside. For now, I will be watching and scrutinising this proposal every step of the way.’ [9] 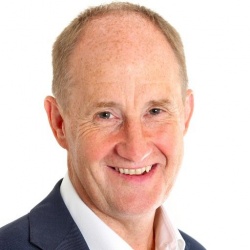 *16 December 2015: voted in favour of loosening regulations on fracking in protected areas and national parks. [10]

In November 2015 he joined the Armed Forces Bill Select Committee.[12]