North Yorkshire County Council in May 2016 gave the go-ahead to Third Energy's shale gas test well in Ryedale, near York. 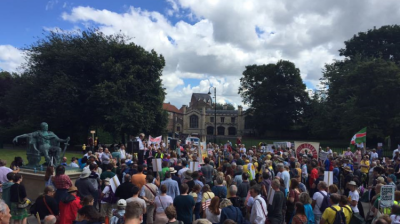 In May 2015 Third Energy became the second firm, after Cuadrilla, to apply for a licence to frack for gas in Britain after submitting an application for a well at Kirby Misperton in Ryedale - about 25 miles from York. Despite protests from local residents and environmental campaigners, Third Energy said it was confident it could proceed in a safe way. The application came after new energy secretary, Amber Rudd, announced 'she was determined to push forward with shale and even allow extraction under national parks', but also promised it would be tightly regulated.[1]

Despite strong opposition from the local community, Third Energy was granted approval on 23 May 2016 to frack for gas at Kirby Misperton by North Yorkshire County Council's planning committee - the first firm to be allowed to frack in the UK in five years. The council voted with a clear seven to four majority.

'Nearly everyone who responded to the council’s fracking consultation in Ryedale rejected the plans,' says lawyer Richard Stein.

In December 2016, the high court ruled against the legal challenge, thereby backing the council's decision and Third Energy's plans to frack. [2]

'North Yorkshire County Council is grateful for the judgement of the High Court, which confirms the planning committee gave proper regard to all material planning considerations before approving the application by Third Energy to undertake fracking for shale gas in the vicinity of Kirby Misperton.'

'The County Council has not sought to bring fracking to North Yorkshire. Having received this application, we had a responsibility to determine it and to apply national and local policies. We followed a statutory process, and the High Court has found that we followed it correctly and has rejected the issues raised by Friends of the Earth.'

'When given final approval, the plan will become a key reference for planning decisions for development for the next 15 years, including hydraulic fracturing for shale gas.' [3]

Campaigners and local residents group expressed disappointment and outrage at the decision. [4]

In January 2016, an investigation by The Independent and Spinwatch found that two thirds of UK insurance companies will not insure against fracking-related damage, including polluted water from a fracking site being spread during a flood, or water contamination.

Top domestic insurers were approached by a test consumer saying they lived within five miles of the Third Energy's planned fracking site in Ryedale. Direct Line offered 'no cover for contamination caused by fracking as contamination is a general exclusion of our policy'. Lloyds Banking Group said 'for a claim to be successful, you would have to be able to prove that fracking is the actual cause of the damage'. Both [[More Th>n]], Axa and Aviva replied that water contamination or damage caused by fracking would not be covered by home insurance, and LV= said 'if the damage was caused by poor workmanship of [fracking] contractors, this would not be covered'.

The investigation came after a DEFRA report warning properties located within a five-mile radius of a fracking operation may incur an insurance premium. [5]