Justin Greenwood is Professor of European Public Policy at Robert Gordon University in Aberdeen, and a visiting Professor at the College of Europe.[1] A former police cadet and one time Student Union president, he has made a speciality of studying 'interest representation' in the EU - particularly corporate lobbying. 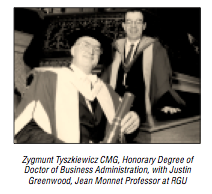 Corporate lobbyist Zygmunt Tyszkiewicz formerly of UNICE receiving his honorary Degree at Robert Gordon University in December 2000. Behind him is Justin Greenwood whose academic specialism is 'EU interest representation' or lobbying.

Greenwood's connections with corporate lobbyists are manifold. For example his 2002 book The Effectiveness of EU Business Associations, is a collection of papers from a conference on business associations. The conference was the first of two co-organised by Greenwood and held in Brussels in September 2000 and May 2002. They were funded by the European Union Framework Five programme with an award of €66,000 to Greenwood and Brussels-based Ernst and Young Association Management, a branch of one of the 'big five' auditing firms which operates European business associations on a consultancy basis. Both conferences were heavily sponsored by corporate interests and lobbying firms, as well as media.[2]

Addressing the issue of effectiveness of business associations, the September 2000 conference was attended by a mix of academics, business leaders, lobbying consultants and a few Commission officials. Speakers included heavyweights of key corporate lobby groups, such as the European employers' federation UNICE, the chemical lobby CEFIC and the EU Committee of the American Chamber of Commerce (AmCham), the main EU umbrella group for large US-based corporations. Among the 50 speakers at the event were representatives from business associations or large firms representing sectors such as chemicals, finance, electricity, automobiles, pharmaceuticals and food.[3] In his opening speech, Baron Williamson, former Secretary General of the European Commission, referred to the conference as "the definitive conference in the field."[4] According to one report the conference was so successful in attracting sponsors and commercial delegates that it made a profit of £20,000 (approximately €30,000).[3]

The May 2002 conference, 'The Challenge of Change in EU Business Associations', saw the organisers go even further in blowing their own trumpet.[5] With all the hype of an advertising copywriter, the conference website raved, "This is without doubt the most impressive conference agenda on the subject ever, bringing together the leading thinkers and practitioners".[5] Speakers included Brian Ager (former Secretary General of biotech lobby group Europabio), Zygmunt Tyszkiewicz (former Secretary General of UNICE), Roy Gentry (EU Affairs Manager of AmCham) and Paul Adamson, the Chairman of Weber Shandwick Adamson, one of the largest lobbying firms in Brussels. Also addressing the conference were leaders (past and present) of trade associations from industry sectors such as IT, steel, textiles, media, financial services and chemicals. Three members of the European Commission spoke, together with representatives from NGO's and the European Parliament,[6] but the event was unmistakably dominated by corporate interests.

Greenwood seems well connected with corporate interests in Brussels, especially with AmCham and UNICE. Connections with former UNICE boss Zygmunt Tyszkiewicz seem to be particularly close. Last year Count Zygmunt Tyszkiewicz was appointed Visiting Professor at Robert Gordon University, where Greenwood works. The University internal newsletter reported his appointment under the headline 'European hero', with a photo featuring a smiling Greenwood with Count Tyszkiewicz. These professional and personal connections are cemented with research funding as well as sponsorship.[7]

According to Corporate Europe Observatory[8]:

Many academics are more than happy to take consultancy/research money from corporate interests. Greenwood has, for instance, undertaken consultancy work for the pharmaceutical industry.[9] In his February 2002 CV posted on the internet he acknowledges: 'Over £200,000 (approximately €300,000) in income attracted over last five years, from outlets including the European Commission, British Academy, Carnegie Foundation, Ernst & Young, Cargill, Pioneer Overseas Corporation, and EU and domestic trade associations including the EU Committee of the American Chamber of Commerce.'[10] In summer 2001 Greenwood interviewed a number of "senior EU policy makers" on behalf of 'a cross-sectoral business association under confidentiality conditions.' As the only cross-sectoral association listed, presumably this is AmCham EU. The rest of the money - around £160,000 (approximately €240,000) (minus the uncharacteristically unpublicised money from AmCham) funded the research for Inside the EU Business Associations.[11]

All of this schmoozing, conferencing, book writing, sponsorship, research funding, consultancy and academic honours are typical of the myriad connections between corporate-friendly academics and corporate interests. It reaches another level with the contribution to Greenwood's research programme by Cargill and Pioneer Overseas Corporation, both much criticised agri-business corporations with huge biotechnology interests. Another link between these companies and Greenwood is the European Centre for Public Affairs (ECPA), a corporate-friendly seminar and lobbying training organisation with close links to the European Commission. Both Cargill and Pioneer are corporate members of ECPA, while Greenwood sits on the ECPA board, together with Ruth Rawling, Vice President Public Affairs for Cargill and Tim Stocker, European Director of Government Affairs for Pioneer.[12] ECPA was one of the sponsors of the conference that Greenwood organised in September 2000.

In a written response to an invitation by the Standards Committee of the Scottish Parliament to comment on the statutory registration of commercial lobbyists Professor Justin Greenwood stated on 16 July 2001:

The requirements of paragraph 21 will certainly keep a number of administrators employed at public expense, but will the public interest be served by this purpose? 'Public Choice' theory suggests that administrators seek to expand their activities in search of careers, status, control and jobs, and in doing so may contravene the interests of the taxpayer and citizen, and restrict the autonomy of other professionals. In short, the public choice tradition suggests there is a tendancy for administrators to find things to do which impose burdens on others and which are not always in the wider public interest, or the stakeholders of the domains in which they operate.

In sum, the proposals seem unduly directed at one type of lobbyist for reasons that are unstated, and as such raise their own injustices. They appear to serve no public interest goal and may even damage it.[13]