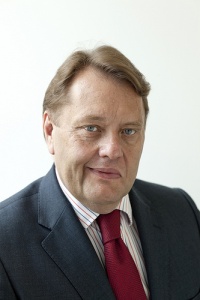 John Hayes was appointed as UK Prime Minister David Cameron's senior parliamentary adviser at No 10 Downing Street in a surprise mini-reshuffle in late March 2013, after serving just seven months as Minister of State at the Department of Energy and Climate Change.

He was appointed a Minister of State at the Department for Transport in July 2014.[1]

He has been the Conservative Party MP for South Holland and the Deepings since 1997. In the 2015 general election, Hayes retained his seat with a majority of 18,567. [2]

On the 11 May 2015 Hayes was appointed to Security Minister for the Home Office, overseeing counter-terrorism, Home Office Science and small and medium enterprise.[3]

Hayes had replaced energy minister Charles Hendry in September 2012 but his controversial tenure and strong anti-wind farm stance brought in-fighting at the department. "Ferocious clashes" with his boss the Liberal Democrat energy secretary Ed Davey had, according to the Guardian, prompted Davey to write to the prime minister to demand that Hayes be taken off the windfarm portfolio. Although Cameron had taken no action at the time, the mini-reshuffle was viewed as an acknowledgement that such "mixed messages at the department were alienating potential [renewable energy] business investors" and the government's commitment to low-carbon energy. [4]

Variously described as a "robust right-winger" and, in his own words, "the personification of blue-collar conservatism", [5] Hayes was previously a Minister of State at the Department for Business, Innovation and Skills.[6]

Along with Labour MP David Cairns, Hayes was a parliamentary chairman for the pro-American America In The World, also known as the London Centre for the Study of Anti-Americanism, launched in October 2008.[7]

In July 2013 The Mail on Sunday published claims that 'climate change sceptic' Hayes had been fired as energy minister in March for 'secretly plotting to persuade an electricity boss to challenge Government policy'. It said it established that just two weeks prior to Hayes being demoted to 'a minor backroom role in Number 10, that he had:

...secretly met E.on chief executive Tony Cocker on March 13 and urged him to help postpone the closure of power stations such as Kingsnorth in Kent. [8]