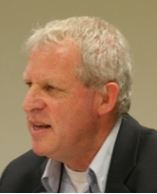 Giora Eiland of the INSS in a photo from the INSS website. Accessed 9 November 2012.

During his career in the IDF, Maj. Gen. (ret.) Eiland served as Head of the Planning Branch; Head of the Operations Branch; and in several command positions in the Paratroops Division.[1] Eiland is currently President of defence company Star Defence Systems Ltd.[2]

Eiland has a BA in economics and a MA in business management, both from Bar Ilan University in Israel.[3]

On the "Global war on Terror"

According to a US diplomatic cable of 2006, Eiland stated:

The War on Terror is Not a Conventional War. It happens among the people in populated areas. Individuals -- not armies -- are now our enemies. We now have to target specific people, not fixed military assets. Because people move quickly, we must have real-time intelligence. All forms of intelligence (e.g., signals, imagery, and human) need to be brought to one person at a very low level (e.g., a brigade commander), and that person must have the authority to make decisions regarding hitting targets. Because the enemy can move quickly and cause significant damage with the technology and know-how at his disposal, CT forces need to be able to react quickly. The rules of engagement are confusing when you do not know who the enemy is. International legal definitions are increasingly irrelevant.[5]

The US cable of 17 March 2006, cited Eiland as making the following point: Israel believes that targeted killings are extremely effective in preventing terrorist attacks. They require that you bypass the ordinary chain of command in order to carry them out. In Israel, for example, a brigade commander is authorized to give orders to Shin Bet (ISA) and Israeli Air Force (IAF) assets to execute such killings.[5]

The Perception of Reality is More Important than Reality. The media has tremendous influence in the GWOT. Perceptions determine domestic and international legitimacy, which affects a country's operational boundaries. We cannot "beat" the media. We have to join it.[5]

Eiland told the Times of Israel on 3 September 2013, that Israel cancelled a planned attack on Iran the previous year because of US pressure. "Netanyahu seriously considered a preemptive strike on Iran, and the Americans were not excited about the idea," he said.[6]

Palestinian-American journalist Ali Abunimah noted in August 2014 that Eiland had, in a Hebrew language op-ed for Mako, a website linked to Israel’s Channel 2 television, called for Israel to block supplies of food and water to Gaza. An article on Electronic Intifada provided an English translation of excerpts of Eiland's article:

“Since Gaza is in fact a state in a military confrontation with us, the proper way to put pressure on them is to bring to a full stop the supplies from Israel to Gaza, not only of electricity and fuel, but also of food and water."
“A state cannot simultaneously attack and feed the enemy, while he is shooting at you, because this gives the other country a breathing space – and again I am referring to Gaza as a country, because the regime there is supported by its people".[7]

Abuminah called this a 'starve or surrender' policy, comparing it to the Syrian regime's use of starvation as a weapon of war, a practice condemned widely including by the U.S.

Citing Article 55 of the Fourth Geneva Convention, Abunimah argued that Eiland's comments constituted a call for war crimes and crimes against humanity and 'may amount to incitement to genocide'.