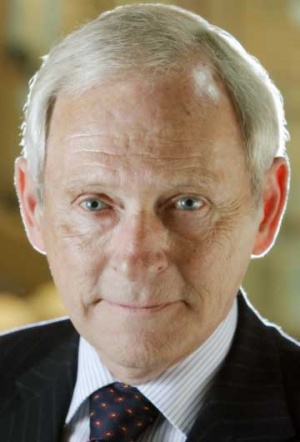 Born on 4 June 1939, George Reid was educated at Dollar Academy and the University of St Andrews (MA Hons). Reid has a background in journalism, as a Features Writer for the Scottish Daily Express, Reporter and Head of News and Current Affairs for Scottish Television, Producer for Granada Television and a presenter for the BBC.

A Scottish Nationalist, his parliamentary career began in 1974 when he was elected MP for Stirlingshire East and Clackmannanshire (until 1979), becoming Vice Convener of the SNP (1997-99), a member of the Scottish Parliament for Mid Scotland and Fife (1999-2003) and for Ochil (2003-2007); during his latter term he was elected Presiding Officer.[1]

The Rt Hon George Reid is a board member of the Futures Forum, a think-tank established by the Scottish Executive.

As Presiding Officer, Reid was Honorary President of the Scottish Parliament Business Exchange[2] which has links to Holyrood Communications/Holyrood Consultations, now 2Collaborate, which advocates privatisation of public services.

Reid presided over several business-orientated events during his time at Holyrood including the Business in the Parliament conference in 2006 and the Microsoft Government Leaders Forum in January 2007.

In April 2007, Reid represented Scotland at Tartan Day in New York, attendind various functions including a dinner for Scottish and American business people. According to his itinerary, 'The event will highlight the potential for cross-links between the entrepreneur communities in the US and Scotland.'[3]

In 2007, the Rt Hon George Reid was made one of four Independent Directors of Culture and Sport Glasgow which hopes to attract entrepreneurs (especially American ones) to invest in its programming and bequeath their collections of Scottish art to Glasgow.