Background to the Formation of Culture and Sport Glasgow

Registered Office of Culture and Sport Glasgow at 20 Trongate

In November 2005, in the wake of the Cultural Commission making its final report to the Scottish Executive and responsibility for its implementation largely having been delegated to local authorities, the Policy and Resources Committee of Glasgow City Council (GCC) approved Glasgow’s Cultural Strategy.[1] In her introduction to this document, Bridget McConnell, then Executive Director of Cultural and Leisure Services (CLS), affirmed the link between cultural participation and economic regeneration, highlighted the continued need for private investment in Glasgow and noted that cultural tourism accounted for 37% of all tourism to the city [2]

In August of the following year, McConnell reminded the newly-formed Policy Development and Scrutiny Committee that the Strategy ‘provided an integrated policy framework that gave long-term direction to the development and provision of cultural activity within the city.’ The direction advocated by McConnell, outlined in a written report to the Executive Committee the following month,[3] was swiftly taken up by Councillor John Lynch, Executive Member for Culture and Sport – who proposed, as per McConnell’s recommendations, that service reform be extended into culture and sport, that a Social Enterprise be created to manage the Council’s cultural and sporting services, which would lead to clear gains in service delivery, fund-raising potential and business development while saving the Council money. At the same meeting, Councillors Steven Purcell and Aileen Colleran instructed McConnell ‘to prepare a detailed business plan to establish the most efficient and effective structure for a Social Enterprise for the delivery of the Council’s Cultural and Leisure Services’, which should define the scope of the organisation, the level of funding required from the Council, and any staffing, tax and legal implications.[4]

Accordingly, international accounting and consultancy firm, Grant Thornton, was contracted to ‘provide information on Glasgow City Council Cultural and Leisure Services for the purpose of transferring the division to a new company’.[5] Reporting in January 2007, the model assumed a 1 April start date and an annual turnover in excess of £90 million. As instructed, the creation of a company was recommended, limited by guarantee with charitable status, with the council as its sole member, and an additional trading arm, or Community Interest Company (CIC) to carry out those functions not deemed charitable by HM Revenue and Customs but gifting all income to the charity. The report alluded to informal discussions having taken place between Burness legal advisors, CLS management and the Office of the Scottish Charities Regulator (OSCR) which convinced the parties concerned that the limited company would satisfy the Charity test. The proposal further suggested that all property remain with the Council, being leased to the new charity for 25 years at a peppercorn rent, that grant-giving powers be retained by GCC and that all staff transfer over, with all pay and benefits reviews having been completed by the proposed transfer date of 31 March 2007.

The rationale for these wholesale changes re-iterated McConnell’s strategy and was centred on the benefits of charitable status such as the absence of tax on rental income and rates relief of up to 100% (80% mandatory; 20% discretionary). In addition to savings, increased development opportunities were identified, via retail and venue hire and via external funding, drawing on the precedent of the Kelvingrove Refurbishment Appeal. It was also stated that ‘the management team has identified new business development opportunities, particularly under the heading of Intellectual Property’.[6] The only notable legal concern in the document was raised in relation to procurement and state aid, with the team expressing reasonable confidence that precedents suggested challenges would not be made, but that the possibility of a challenge could not be excluded.[7]

Formation of Culture and Sport Glasgow

The outcomes of Grant Thornton’s work were presented at the GCC Executive Committee on 2 February 2007, in advance of which McConnell ‘recommended that Members instruct the Chief Executive [herself] to complete all necessary arrangements to establish the Company Limited by Guarantee with Charitable Status and put in place the appropriate management arrangements to effect the transfer of staff and assets in line with the proposals included within this report by 1 April 2007 to ensure that the Charitable Company is fully operational by 31 March 2007’.[8] The Council approved the establishment of Culture and Sport Glasgow, agreeing that the interim board would be comprised of the Lord Provost Liz Cameron and Councillors Steven Purcell (Leader of the Council), John Lynch, Archie Graham (Chair of the CLS Policy Development and Scrutiny Committee), Ruth Simpson (City Treasurer) and John Mason (Leader of the Opposition), Bridget McConnell (as Executive Director) and four external members: Sir Angus Grossart, Lord Stevenson of Coddenham (Chairman of HBoS), Lord Macfarlane of Bearsden and George Reid (Presiding Officer of the Scottish Parliament). It is interesting to note, however, that Culture and Sport Glasgow and its trading arm had already been incorporated as private limited companies six weeks earlier, on 22 December 2006.

Reactions to the Creation of Culture and Sport Glasgow

The main challenge to the moves outlined above came from Unison. Representing the majority of affected public sector workers, the union objected to the proposal on several grounds – that workers would suffer,[9] that the successful fundraising undertaken in relation to the Kelvingrove renovation was a spurious precedent for guaranteeing future funding, which might contribute further pressure to seek private investment, that democratic accountability (beyond the ‘lucky six’ councillors appointed to the board) would be lost in relation to a number of key services, leading to an ‘arms-length’ private company, that the scheme represented a tax dodge, explicitly prohibited within Labour Party policy, and that this move would compromise the credibility and fundraising potential of legitimate charities [10] [11] Unison swiftly mounted a legal challenge, applying for an interim interdict against the Council’s proposals in March 2007,[12] and seeking a judicial review of the process, both of which were unsuccessful.[13] [14] In January 2007, as a result of similar concerns, Culture Minister, Patricia Ferguson, had also sought reassurance about the legality of the move.[15]

Another objection was made by Scots Tory MEP, Struan Stevenson, on the grounds that the creation of a new company to oversee culture and leisure should have been put out to tender and that the state cannot directly or indirectly subsidise a company.[16] Responding to the claims of a whistleblower presumed to be a high-level GCC official, Stevenson seized upon the potential for legal challenge identified by Grant Thornton to spark an enquiry at the European Commission. Competition commissioner Neelie Kroes passed the matter over to European Commissioner, Charlie McCreevy who is widely acknowledged to be in favour of free markets.[17] McCreevy contacted the Scottish Executive on 10 April 2007 which, just days before Bridget McConnell’s husband lost his role as First Minister, penned a joint response with GCC, refuting any claims of illegality, which was accepted by the Commission.[18]

Despite the £1.5million Glasgow City Council invests in broadsheet advertising every year, Scotland’s main newspapers reported the controversies surrounding the creation of Culture and Sport Glasgow, including legal challenges to the scheme, and published angry readers’ letters and blogs.[19] The tabloid Evening Times greeted with scepticism the appointment of James Doherty as a £52,000 p.a. spin doctor[20] to announce that ‘the people of Glasgow will only learn about major cultural decisions if trust bosses decide to issue a press release’.[21] The pages of the same paper were used to allay fears that charitable companies like Culture and Sport Glasgow would not be vulnerable to the Freedom of Information (FOI) Act 2002. Council Leader and CSG Board member, Steven Purcell, reassured citizens that ‘a commitment to meeting all the Freedom of Information requests currently met by Cultural and Leisure Services is guaranteed as Culture and Sport Glasgow is a publicly owned company and is therefore obliged to comply with the legislation’.[22] 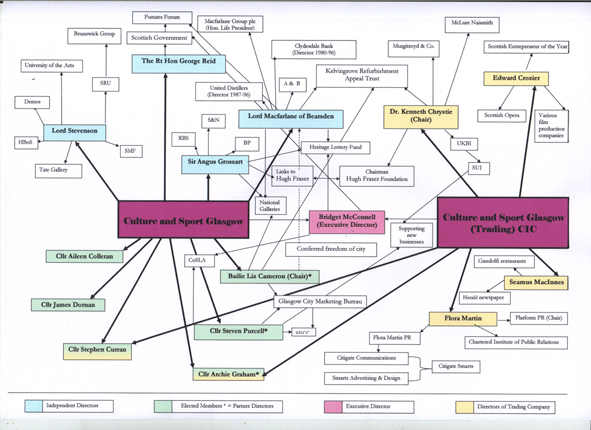 Diagram of interactions at Culture and Sport Glasgow

Of these, the three most important are the Partner Directors Liz Cameron, Archie Graham and Steven Purcell.