Bridget McConnell: no 15 in the Power 100 list published by Scotland on Sunday .[1]

Born Bridget Mary McLuckie on 28 May 1958, she was educated at Our Lady's High School, Cumbernauld, St Andrew's University (MA Hons 1982), Dundee College of Commerce (DIA 1983) and Stirling University (MEd 1992). [2] Her brother, Robert McLuckie, is a millionaire property tycoon who has been portrayed in the press as drunken, sectarian and lewd.[3] McLuckie was embroiled in a deal to buy a plot of land and five houses from the Executive for £2 in 2004 which was valued at £1,000,000 in 2007, prompting questions about donations received by Jack McConnell.

While studying at St Andrew's University, Bridget met Procul Harum lead guitarist, Richard Smith and they had a daughter, Hannah, and a son, Mark, three years later. In 1988, Bridget met Jack McConnell who would go on to become First Minister of Scotland from November 2001 to May 2007, and filed for divorce from Smith to marry Jack in 1990.[4]

Bridget's second marriage has not always been a happy one, with Jack admitting to an affair with Labour Party press officer, Maureen Smith, at a press conference on November 13, 2001 and Bridget saying 'she had almost been driven to suicide and "wanted to die" after suffering a breakdown' in 2003.[5]

Through her ongoing involvement with CoSLA (the Convention of Scottish Local Authorities), as Link Arts Adviser (1997-2001) and Joint Chair of the COSLA/VOCAL Culture Strategy Task Group (2005), McConnell has been instrumental in developing guidance on local authority implementation of the National Cultural Strategy, which she had been a member of the Focus Group to develop in 2000. 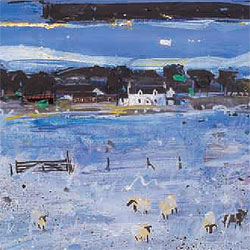 On 18 December 2002, the First Minister’s[6] wife, Bridget McConnell, in her capacity as Chair of VOCAL (The Voice of Chief Officers of Culture, Leisure and Community Services in Scotland) wrote to the group charged with implementation of the Scottish Executive’s National Cultural Strategy to propose a national review of local government cultural and leisure services.[7] This intervention – which led to her being copied into several of the documents collected by the subsequent Cultural Commission[8] – instigated research into local authority provision being commissioned from private consultants PMP, which generated a report in March 2005. The late submission by GCC to PMP’s questionnaire detailed museum attendances three times higher than any other local authority, and a large proportion of cultural funding having been ring-fenced to tackle broader priorities in line with the Executive’s cross-cutting exercise.[9]

On the occasion of Culture Minister, Patricia Ferguson, making her recommendations on the future of the arts in Scotland in January 2006, in response to the recommendations of the Cultural Commission, it was said of Bridget McConnell ‘arts figures across Scotland are unanimous in one thing: the conclusions of Ferguson’s blueprint, which controversially propose to hand more influence over Scotland’s arts scene to local and central government, were wrought in [McConnell’s] image.’[10]

Later in 2006, Bridget spearheaded the controversial devolution of Glasgow City Council's Cultural and Leisure Services to form the company/charity known as Culture and Sport Glasgow with a separate trading arm, Culture and Sport Glasgow (Trading) CIC. Since March 2007, she has held the post of Chief Executive of both companies. At the same time as securing more arms-length control of cultural provision at a local level, it is said that she was exerting pressure for tighter control of funds by civil servants at a national level.

Controlling all cultural provision in Glasgow, Bridget McConnell would be expected to have an interest in culture. Some insight into her taste in art comes from the Christmas present she commissioned for husband Jack in 2004 - an oil painting by Hamish MacDonald of the farmhouse on Arran where Jack grew up. [11] Writing in 1997 – the year Glasgow-based artist Christine Borland was nominated for the Turner Prize, with her contemporary, Douglas Gordon, having won the prestigious prize the previous year – McConnell confined her appraisal of visual art successes in Scotland to an earlier generation of painters, mis-spelling Peter Howson’s name to commend ‘the internationally successful Belamey, Campbell and Howie [sic]’.[12] To compensate for the gaps in her arts knowledge, McConnell has seconded Dr. Vartan Gregorian, President of the Carnegie Corporation of New York as an advisor, although his role seems confined to making links with wealthy Scottish émigrés as part of the CSG development strategy.

Bridget McConnell is fully conversant with the fact that culture and sport generate tourism and increase the revenue of a city. In her introduction to Glasgow’s Cultural Strategy, published in 2005, she noted that cultural tourism accounted for 37% of all tourism to the city.[13] She has also compared the new Zaha Hadid-designed Riverside Museum, due to open on the banks of the Clyde in 2010, to the Guggenheim Museum in Bilbao, widely regarded as the pinacle of cultural tourism.[14] As such, her ambitions for Glasgow closely overlap with those of Glasgow City Marketing Bureau.

This emphasis on cultural tourism has led to a 'festival mentality', whereby the city's support is concentrated on attracting temporary tourists rather than building infrastructure or supporting Glasgow's creative practitioners directly. March 2008 saw The Magners Glasgow International Comedy Festival, Aye Write! - The Bank of Scotland Book Festival - and the 16th French Film Festival UK. This was followed, in April 2008, by the Glasgow Art Fair and the two-week biennial visual arts fest, Glasgow International.[15]

In September 2003, GCC’s Cultural and Leisure Services (CLS) department had, under McConnell’s direction, exposed itself as sadly lacking a visual arts policy. This came to light as Scottish Ballet approached the Scottish Arts Council for Lottery funding to develop the Tramway arts centre into its new headquarters, with the vast exhibition space being earmarked for as a scenery store, provoking outcry amongst Glasgow’s visual art communities.[16][17][18][19][20]

In the wake of the Tramway debacle, Glasgow City Council hastily implemented two strategies; the first of these implemented the festival-based approach that has proven so successful in attracting tourists to rival Edinburgh. Glasgow International, an annual exhibition that quickly became biennial, effectively branded the exhibitions already taking place in the city’s main institutions and grassroots organisations and sits neatly alongside Glasgow’s tourism strategy. In 2008, Glasgow International was coordinated by Jean Cameron. [21]

The second exercise in consolidating CLS’s visual arts strategy came via Trongate 103 – the redevelopment and branding of a block at the corner of Trongate and King Street as a unified arts complex which is due to open in 2009.[22] This taps into a familiar strategy of culture-led regeneration and dovetails neatly with the five year action plan devised for the regeneration of the Merchant City area east of the city centre.[23]

Based on past evidence, then, McConnell ostensibly regards contemporary visual art in terms of its use value, in relation to tourism, social inclusion and economic regeneration, and is currently campaigning to have a National Gallery in Glasgow.

In August 2005, there was an outcry about McConnell being appointed, after negligible consultation, as Executive Director of Culture and Sport within Glasgow City Council - a £107,000 p.a. post, with a portfolio for sport and hence a role to play in the Commonwealth Games 2014.[24] The appointment, which was announced on 12 July 2005, came one month before Jack McConnell announced the Executive's intention to support the bid.[25]

However, in June 2007, it was reported that McConnell had been dropped from the steering group, to be replaced by Sean Connery, in case her presence upset Alex Salmond.[26] In the meantime, the McConnells have come under fire for their lavish trips in relation to the Commonwealth Games. The couple flew to Melbourne in March 2006, staying in a luxury £250 a-night hotel, accompanied by fellow culture and sport cronies Liz Cameron and John Lynch[27]

Plans to house the sports development team of Culture and Sport Glasgow at the National Indoor Sports Arena (NISA) at Parkhead, site of the Commonwealth Games [28] were confirmed in April 2008.[29]The cost of building NISA has quadrupled since it was first announced.[30]

With connections to the top of the Scottish Labour administration, Bridget McConnell has had run-ins with the SNP. John Mason, SNP's leader within Glasgow City Council, initially opposed the selling off of the city via the creation of Culture and Sport Glasgow.[31] In March 2007, when it became clear that CSG would hold its meetings in private, Mason was quoted as saying:

This confirms our worst fears. The advantage of having museums and everything else under democratic control is that the public has access to what is happening. When you hive things off to other legal entities then this is the sort of thing that happens. Presumably it is entirely able to have its meetings in public, the same as the council. Not every culture and leisure committee is packed with the public and over the years there have been some sensitive issues which have been taken in private. But there have been some very important community issues such as the closure of the Govanhill Pool and the Chirnsyde Centre in Milton. These decisions would all be taken behind closed doors now.

In May 2007, when it became clear that the formation of the two new CSG companies was going ahead, Mason announced that the SNP would be represented on the board of CSG and James Dornan was duly elected. [32]

Earlier, in December 2006, Bridget McConnell had accused SNP Councillor, Billy McAllister, 'of invading her personal space and shouting at her for one-and-a-half minutes. But CCTV footage proves the heated encounter in Glasgow's City Chambers only lasted 14 seconds and the pair were not even in the same room at the time.' [33]

Following the renovation of Kelvingrove Museum, McConnell is now campaigning to establish a Gallery of Scottish Art in Glasgow.[34] According to reports, 'the scheme was discussed as far back as 1993, when the Post Office on George Square and the former Sheriff Court buildings were suggested as venues. But it failed to attract Heritage Lottery funds.'[35] Bridget McConnell has been a member of the Heritage Lottery Fund Committee for Scotland since September 2004.

One option is for the National Galleries of Scotland (NGS), based in Edinburgh, to lend works to Glasgow, but there is resistance to this scheme from NGS director, John Leighton, on the grounds that it would dilute the collection and that a gallery showing only Scottish art would be parochial.[36]. This is especially significant in light of the fact that London-based art dealer, Anthony d'Offay donated his £125m art collection to NGS and Tate in February 2008.[37]a deal with which Jack McConnell personally involved himself while First Minister.[38] Notably, two Board members of Culture and Sport Glasgow - Liz Cameron and Sir Angus Grossart - have previously served on the board of NGS, while Grossart and fellow Independent Director of CSG, Lord Macfarlane of Bearsden, have sizeable collections of Scottish art.

Another option is that Vartan Gregorian, Special Advisor to the Board of Culture and Sport Glasgow, would be involved in convincing wealthy Scottish emigres to gift their collections of Scottish art to Glasgow. It was reported that 'Among other responsibilities he is courting rich Scottish emigre families such as the MacMillans, owner of the multinational Cargill, who have an acclaimed art collection.'[39]

If CSG achieved national status for its museums, it would be eligible for additional funding from the Scottish Parliament.[40]

In 1987 Bridget was awarded the first British American Arts Association/University of Minnesota Fellowship and in 1999 was made a fellow of the Royal Society of Arts. She is also currently a member of the Board of RSAMD (since 2002), member of the Sunday Herald Advisory Board (since 1999) and the Heritage Lottery Fund Committee for Scotland since September 2004. She has written and presented a number of papers on Arts, Education and Leisure policy and practice, including 'Arts and Adult Education in Fife' published by the Free University of Brussels in Truth without Facts (1995) and co-edited 'One World, Many Cultures', papers from the Fourth International Conference on adult Education and the Arts (1996).[41]