Jack McConnell (Lord McConnell of Glenscorrodale) is a Labour peer in the House of Lords, having joined on the 28 June 2010.[1]

In 2001 he was elected the third First Minister in the devolved Scotland. There is a 'widespread view of [McConnell] as a 'machine politician'.[2] This is often explained in terms of his history as part of the Labour 'Lanarkshire mafia'.[3][4] 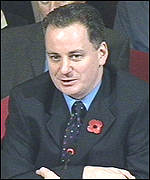 McConnell was centrally involved in the first lobbying scandal of the Scottish Parliament known as 'Lobbygate'. A former General Secretary of the Labour Party in Scotland, McConnell was recruited to a lobbying firm which was a joint venture between Beattie Media and Scottish law firm Maclay Murray & Spens, called Public Affairs Europe Ltd.[5]

Jack McConnell, a Labour Holyrood hopeful, has also become involved in the "cronyism" row but said he did not see a conflict of interest in his move from general secretary of the Scottish Labour Party to a lobby company, Public Affairs Europe. He said his new employer advised on the political climate and did not arrange meetings with ministers.[6]

McConnell has launched an internal Labour party consultation on whether new nuclear power stations can be built in Scotland, but it is widely predicted that if Blair gives the green light for nuclear, Scotland's Labour party will follow suit.

Scotland's First Minister is said to be "paving the way for a Scottish Labour U-turn which would remove its opposition to new nuclear power stations being built in Scotland."[7]

This was the scandal over the £11,000 hole in the Accounts for McConnell's constituency party in the West of Scotland town of Wishaw.

In the view of Kenny Farquharson of the Sunday Times:

Wishawgate has taken us deeper than ever into the labyrinth of score-settling, jealousy and personal animus that is the Scottish Labour party. It has also taken us down seldom trod alleys of McConnell's life, revealing the true nature of the sometimes shady political world in which he operates. Wishawgate is not the end of McConnell's career. It may not even be the beginning of the end. But it will hang around the first minister's neck for the foreseeable future and its unpleasant smell could prove hard to dispel.[8]