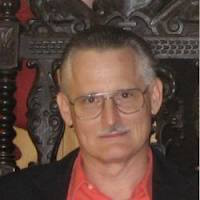 Europe can wake up now, or it will be jolted out of its slumber later by a knock on the door. Waiting on the other side is an armed man in a uniform, a man of firm purpose, having no qualms and no scruples. He is ready to act at a moment’s notice, and with absolute ruthlessness. Baron Bodissey, October 2006.[1]

Edward S. May is a director of the Center for Vigilant Freedom (CVF). He is also the Outreach Coordinator for the International Free Press Society[2], using Ned May as his alias. Under the pseudonym, Baron Bodissey, May runs the Gates of Vienna[3] blog which, along The Brussels Journal blog (run by fellow IFPS director Paul Beliën), serves as the CounterJihad Europa website's blog and news services.

May uses unspiek@chromatism.net as the email address on his Gates of Vienna blog[4]. This domain was purchased by Edward S. May from a local Internet provider in Virginia, US, in 2001[5].

"The mailing list for the 2007 Counterjihad Conference in Brussels lists as organiser: "Ned May (Baron Bodissey)" - and also gives his e-mail address as unspiek@chromatism.net. The website chromatism.net itself gives the owner's name and address as: Edward S. May."[6]

In July 2010, Gates of Vienna announced that Baron Bodissey would begin blogging under his real name at Andrew Breitbart's Big Peace.[7] May's bio at Big Peace confirms he is the proprietor of Gates of Vienna.[8]

May's father was an employee of the National Security Agency.[9] May has written of him:

My father worked for Signals Intelligence as a cryptographer during World War Two and the Cold War. He always took his security clearance seriously: he never discussed the content of his work at home. Neither his wife nor his children knew what he did for a living until after he retired and the NSA gave him a cryptography award. Finally, I knew what my dad did for a living![10]

May lived in England for a period in his youth before attending college.[11]

He states on one Gates of Vienna thread that he attended Harrogate High School:

I lived in Harrogate, Yorkshire, for four years, 1966-1970. Back then it was in the West Riding. I attended a grammar school, and took my O-levels and A-levels there.[12]

Given his father's profession, one may perhaps speculate that this involved a connection with the NSA base at Menwith Hill, near Harrogate.

May graduated from the College of William and Mary in the early 1970s.[13]

May was based in Howardsville, Virginia from at least 1999.[14] In a 2002 campaign contribution filing, May was listed as a self-employed computer analyst and artist.[15] In a similar 2004 filing he was listed a systems analyst for Apex Inc.[16]

He left his Richmond, Virginia-based job in mid-2007:

What I didn’t fully anticipate was how hard it is to find jobs in my field in the Charlottesville/Lynchburg area. I’m a computer programmer, but with a fairly narrow specialty. In the high-tech corridors around Reston or in the West End of Richmond there are plenty of jobs in my range. But it turns out that around here such jobs are few and far between.[17]

May is a member of the Episcopalian Diocese of Southern Virginia, and helped to develop its website, according to a diocesan periodical which stated:

Ned and his wife Ceara live near the very small town of Howardsville, in the far northwest corner of this diocese.[18]

An October 2000 version of May's website would appear to indicate he married Ceara Sullivan in 1980.[19]

The first entry on the Gates of Vienna blog was a post by Baron Bodissey on 9 October 2004. It claimed that the "Global War on Terror" should be seen as "GIJ3W: The Great Islamic Jihad, Third Wave":

The thesis of this blog is that, like it or not, we are in a religious war. We do not define the terms but we should take careful note of them. We are mistaken if we think the Enemy wants merely to kill us. Once again, Jihad offers two choices to the West: conversion or death. Jihad exists in order to annihilate unbelief. Christians, Jews, Hindus, atheists, or Wiccans, it is all the same to him.[20]

May attended a Pajamas Media event at the National Press Club in Washington in September 2006, along with a number of other bloggers.[21] A month later, Pajamas Media published May's report on filtering of political websites on the Department of Interior's internal computer network.[22]

"Given my imminent unemployment and reduced circumstances, Counterjihad Copenhagen 2009 will likely be my last such event for the foreseeable future"[23]

In an October 2006 response to Fjordman, May/Bodissey accepted Fjordman's thesis of a coming European Civil War:

This process is beginning already, as the recent election in Sweden shows. The parties that have up until now been marginalized by these élites as “right-wing extremists” — the British National Party, the Vlaams Belang in Belgium, the Dansk Folkeparti, and the Front National in France, for example — have grown increasingly popular in recent months, despite the opprobrium of the cognoscenti.

Eventually, when the situation gets bad enough, one or more of these “extremist” parties will gain power, either through an outright majority or through a majority within a center-right coalition. At that point the nationalist party gains the right to appoint its members to the key Defense and Interior Ministries (or their equivalents within a particular country).[24]

He went on to suggest that the "ruling elite" would not cede power to the "renascent nationalists" without violence:

We all hope this doesn’t happen. We hope that those in the entrenched ruling class will place the interests of their people above their own hold on power. But history holds out scant reason for optimism in such situations.

Europe can wake up now, or it will be jolted out of its slumber later by a knock on the door. Waiting on the other side is an armed man in a uniform, a man of firm purpose, having no qualms and no scruples. He is ready to act at a moment’s notice, and with absolute ruthlessness.[25]

But that just makes them the Josef Vissarionovich Djugashvilis of the Counterjihad. We deal with Uncle Joe now, while we need him. Later, after all the mujahideen have earned the 72 black-eyed ones, our relationship with the remaining Muslims may have to change — after all, they do revere the Koran and the Hadith — but, for now, we’re in the same fight together.[26]

we are Islamophobes — but with good reason. You’re bound to be an Islamophobe if you watch what’s happening in Beslan or Sydney, in Rinkeby or Clichy-Sous-Bois, in Leeds or Dearborn, in Thailand, Kashmir, Lebanon, Gaza, Nigeria, Sudan, Indonesia, and the Philippines.

Islamophobia is a rational response to current events. If you’re not an Islamophobe, you’re not paying attention.[27]

We agree with Fjordman and many others that the Jihad is just a symptom, and that the enemy lies within. This war is a civil war within the West, between traditional Western culture and the forces of politically correct multicultural Marxism that have bedeviled it for the last hundred years. It is being fought in the back halls and cloisters of the culture, with untenured nobodies like me wielding a salad fork against the broadswords and maces of the fully-armored knights of the media and the academy.[28]

I’ve been saying for a while now that it’s wrong — and counterproductive — to write off the entire Left. Christopher Hitchens and Nat Hentoff are not the only ones who understand what’s important.

Anti-jihad leftists are in the same bind as “moderate” Muslims — they are vilified, ostracized, and threatened because of their heresy. A heretical leftist may get to keep his head, but he will likely find his property destroyed and his career ruined because of his apostasy.[29]

Buoyed by the 'whiteness' of Warsaw

In a blog about the Counterjihad Warsaw 2013 conference, Bodissey wrote of feeling 'buoyant' at the 'whiteness' of the city of Warsaw and the lack of what he called 'third-world immigrants':

'The most surprising thing about Warsaw — and here’s where I get really politically incorrect — was its “whiteness”. There was no significant evidence of mass immigration in the Polish capital, in refreshing contrast to major Western European cities. Poles drive the taxis, bus the restaurant tables, clean hotel rooms, work the cash registers at convenience stores, run construction equipment, and mow the grass. Mind you, some of them may be Lithuanians or Ukrainians — I’d never be able to tell — but they were distinctly not third-world immigrants.

By and large...Warsaw resembles London or Amsterdam or Oslo as they appeared fifty years ago, when I first moved to England. It is a European city populated by Europeans, who fill all the necessary societal niches. I had forgotten what such a place looked like — it made me so buoyant that I wanted to tip the cab drivers and waitresses extra, just for being Poles.'[30]