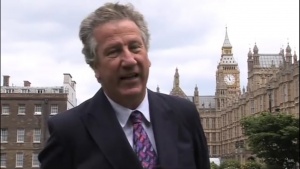 David Mowat has been the Conservative Party member of parliament (MP) for Warrington South since 2010.

In May 2015 he was appointed private parliamentary secretary (PPS) to Greg Clark, the secretary of state for communities and local government.

He was previously PPS to Clark as financial secretary from 2012 and in subsequent ministerial roles as cities and constitution minister and later also universities and science minister.

<youtube size="medium" align="right" caption="Minister says fracking would be subject to highest safety standards on visit to Warrington">1eaeJXjKTls</youtube> Mowat's constituency includes one oil and gas licence blocks, awarded to INOES by the Oil and Gas Authority under the 14th licensing round in 2015. There are plans for one well and 2D and 3D seismic surveying; no applications are currently underway. [1] IGas has also owned a license block covering part of Mowat's constituency since 2009 and a coal bed methane production site at Doe Green. [2] In 2011, David Mowat met with Andrew Austin, CEO of IGas, following an announcement that the energy company would be expanding the site. [3]

In August 2015, Mowat hosted a visit by the former energy minister around the IGas site. Speaking at the site, Leadsom said the site demonstrated what a 'potential hydraulic fracturing site' would look like:

'I was very impressed. It’s exactly what a fracking site would look like. You would hardly know it was there. The whole site is hardly more than the size of a hockey pitch.'

Campaigners criticised the visit as 'a sign of desperation and no more than a stunt', saying the scale and costs of coal bed methane production bare no resemblance to those needed for shale fracking. [4]

In February 2015, Mowat replaced Kevin Hollinrake as vice-chair of the parliamentary group on unconventional gas and oil.

In September 2016, Mowat condemned the Labour Party's pledge to ban fracking across the UK, saying 'regardless of who is in government, the UK will need gas for at least the next 20 years.' [5]

Commenting on the decision by the government to green light fracking in Lancashire, Mowat wrote on his website

Mowat has generally voted against increased regulation on fracking. [7]