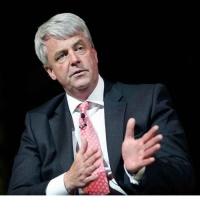 Andrew Lansley is a Conservative Party politician in the UK. He was the member of Parliament (MP) Cambridgeshire South from 1997 to 2015. In July 2014 Lansley announced he would not stand in the 2015 general election and will attempt to find an 'international' role.[1]

He ranks 29th in the Telegraph's Top 100 most influential right-wingers. According to its profile: "Despite the odd gaffe, Andrew Lansley has impressed David Cameron by the manner in which he has managed to cultivate health professionals over the last five years. He has been successful in almost neutralising health as an issue for the Conservatives."[5]

On the 5 October 2015, Lansley was awarded a life peerage in the UK House of Lords, assuming the title Baron Lansley of Orwell in the County of Cambridgeshire. [6]

Having departed his role as Leader of the House of Commons and Lord Privy Seal in July 2014, Mr Lansley has taken on a number of new positions in the private sector.

Relationships with the private health sector

Lansley has accepted donations from:

The 2010 Conservative Party conference offered private healthcare companies ample opportunity to lobby the Secretary of State for Health, Andrew Lansley, and his team of Ministers and special advisers. For example, Lansley spoke at a number of fringe events, hosted by among others private hospital company, Circle, pharma giant Novartis, and the think tanks ResPublica and 2020health.

Lansley has strong links with the centre-right think tank 2020health. According to its website, Lansley said of 2020health: “I have been very impressed with some of the discussions and documents that have emerged from 2020health. They are looking at serious issues (for example vaccination, dentistry, screening) and providing valuable impact on future policy.”,[10] He also chose 2020health’s annual lecture in January to launch the Conservative Party’s green paper on public health[11] Julia Manning, Chief Executive of 2020health and a former Conservative Party candidate, in January 2010 also hosted a "Cameron Direct" town hall meeting for the Prime Minister.[12]

It was reported in January 2010 the Tories have opened up talks with "a series of private firms after pledging to step up the role of the independent sector in the NHS."[13]

Lansley was a paid director of marketing company Profero to the end of 2009.[14] Profero's clients have included Pepsi, Mars, Pizza Hut and Diageo's Guinness.[15] Lansley left his post as director with Profero in 2009. According to Social Investigations "In 2008, a senior NHS executive appearing in a commons committee, accused Daigeo of flouting voluntary agreements on responsible drinking labelling. In 2010 Lansley invited fast food companies and Diageo in for discussions on how to tackle obseity, and binge drinking." [16] This initiative is the Public Health Responsibility Deal and uses partnerships with corporations to give the impression of action happening on public helath.

On diet legislation and trans fats

According to a July 2010 report in the Daily Mail, Lansley rejected the advice of official health watchdog NICE on the issue of dangerous trans fats in food and sided with the food industry – which argues a ban is unnecessary. It is estimated that trans fats are responsible for as many as 7,000 premature deaths a year.[17]

In a separate announcement, Lansley told the British Medical Association the Government was likely to opt out of legislating on health and diet.[18]

Lansley also took the opportunity to criticize chef Jamie Oliver's campaign to make school meals healthier. Lansley said it was wrong to lecture people on what they should eat and argued the efforts of Jamie Oliver to tackle child obesity and ill-health had failed.[19]

Oliver replied to Lansley by saying:

To say school dinners hasn't worked is not just inaccurate, but is also an insult to the hard work of hundreds of thousands of dinner ladies, teachers, headteachers and parent helpers who strive to feed schoolkids a nutritious, hot meal for 190 days of the year.[20]

Oliver added that any problems were due to there being too little funding available to train school catering staff properly.

Funding for healthier ingredients has also been an issue. When Oliver began his school meals campaign in 2005, the amount typically spent on ingredients for a school meal was between 35p and 45p per day per child. This compared with an average of 60p per lunch spent on inmates by the prison service.[21]

Friend of the Alcohol Industry

Andrew Lansley the UK's Health Minister praised the alcohol industry for their efforts to improve public health at the 2011 Wine & Spirit Trade Association annual conference on 14th September 2011. This is surprising given the lack of action evident in moves to improve alcohol-related health and rates of harm. Chris Mercer reporting for the trade publication Just Drinks noted that the health secretary said "Thank You" to the alcohol industry "at least 5 times in the first ten minutes of his speech". [22] Lansley, said Mercer, "heaped praise on the industry's commitment to the government's 'responsibility deal' to reduce alcohol harm. He also reinforced the official line that this Government prefers "voluntary action" over regulation. Hard-talking, anti-alcohol health lobbyists have largely been driven underground by a Government that prioritises business and dislikes intervention". [23] These "anti-alcohol health lobbyists" are in fact public health advocates who propose evidence-based alcohol control policies, and are therefore the enemy of the alcohol industry.