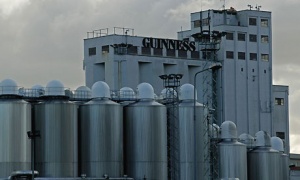 The history of the Guinness family company is celebrated as an important part in the history of Dublin. Arthur Guinness began brewing beer in 1759. He and his family had a reputation for philanthropic activities, which included providing parks and housing for Dublin's poor in the 19th century, when governments relied on private beneficence to enable public services to exist. Diageo’s website celebrates this element of the history of Guinness and links it with its own current policy of social responsibility [1].

Furthermore, retaining the St James operation is also a useful marketing strategy. Guinness have a product, distributed world wide called 'essence of Guinness'. This is Guinness brewed in Dublin at St James’s Gate and shipped to its overseas breweries where it is added to the Guinness brewed there. The company then claim that a little bit of Ireland is in every pint. [3].