Difference between revisions of "Neil O'Brien" 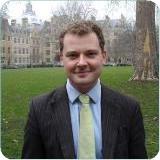 O'Brien was first appointed as special adviser to George Osborne at the Treasury in 2013, where worked on the on the Northern Powerhouse project. [1] He was previously director of Policy Exchange and the former director of Open Europe - both part of the Stockholm Network of free market think tanks. In 2006 the right-wing American Smith Richardson Foundation gave a grant of $176,000 to the Policy Forum on International Security Affairs for O'Brien to research and write a book on the future of the European Union. [2]

O'Brien was born in Huddersfield in 1978. He graduated from Oxford University in 2000 with a BA in politics, philosophy and economics and joined the campaign against Britain joining the single currency as an economics researcher. [3] According to an article in the Guardian, O'Brien 'has a background in City PR', [4] which if true was presumably before he joined the anti-EU campaign.

In May 2003, when O'Brien was a member of the campaign team of the No Campaign, it was reported that from June he would head a breakaway group provisionally called Vote 2004 to campaign for a referendum. [5] According to a report in The Times that June the group was set up by Lord Saatchi and by that point had already raised £2 million in funding. [6]