Thomas Mair is a 52-year-old unemployed gardener from Batley, West Yorkshire who was sentenced to life in jail in November 2016 for the murder of British Labour MP Jo Cox during the June 2016 Brexit referendum.

In court, Mair gave his name as "death to traitors, freedom for Britain".[1]

Mair was mentioned in a 2006 newsletter of the neo-imperialist Springbok Club and described him as “one of the earliest subscribers and supporters of S.A.Patriot”, the magazine published by the club.[2] However, the note also suggested that his connection with the Club had ended prior to 2006. After the killing of Jo Cox MP, a statement was issued by S.A. Patriot editor Alan Harvey stating that Mair had been a subscriber in the 1980s but dissociating the Springbok Club from him.[3]

Harvey's claim that the club had "no further contact with him after a brief correspondence in the mid-1980s" was contradicted by the emergence of two letters by Mair published in South African Patriot in Exile 1991 and 1999. Mair states that he was introduced to the magazine by the British National Front, rails against "collaborators" and "traitors" and one concludes "I still have faith that the White Race will prevail, both in Britain and in South Africa, but I fear that it's going to be a very long and very bloody struggle".[4] In one letter Mair also laments the killing of John McMichael, an Ulster Defence Association (UDA) and Ulster Freedom Fighters (UFF) leader who was arrested following the attempted assassination of former MP Bernadette McAliskey and her husband in County Tyrone in 1981, though charges were later dropped.[5] 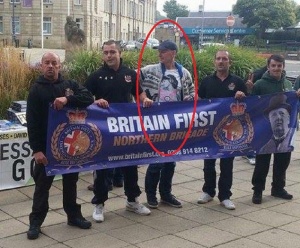 Anti-fascist activists claimed Mair is in this Britain First protest photo found on the group's Facebook page (since taken down). Neighbours reportedly confirmed his identity however it remains unclear whether it was Mair. [6]

Following Mair's arrest, two witnesses alleged that they heard the person who attacked Jo Cox shout "put Britain First" or “Britain First”, possibly a reference to the far-right political party. Paul Golding, the leader of Britain First denied any link and issued a statement saying the group “were as shocked as anyone”, that Mair was “categorically not a member” and that the organisation "would not condone actions like that".[7]

Anti-fascist activists, however, have claimed a photograph on Britain First's Facebook page showed Mair at one of the group's Northern Brigade protests. The photograph (right) was taken down.

Neo-Nazi regalia was found in Mair's house by police following his arrest. The Southern Poverty Law Center published receipts it said showed Mair was a "longtime supporter" of the US neo-Nazi group National Alliance, founded by William Pierce, including purchasing subscriptions for periodicals and a manual that included instructions on how to build a pistol in 1999.[8]

In late May 2000, Mair reportedly attended a meeting in London Stephen Cartwirght, Mark Cotteril and Richard Barnbrook of the British National Party (BNP), arranged at the request of William Pierce of the National Alliance. A paid FBI informant Todd Blodgett who was at the meeting said he believed Mair was associated with National Alliance’s Leeds chapter.[9]

Head of special crime and counter-terrorism at the Crown Prosecution Service Sue Hemming said: 'Mair has offered no explanation for his actions but the prosecution was able to demonstrate that, motivated by hate, his premeditated crimes were nothing less than acts of terrorism designed to advance his twisted ideology.' However, Mair's crime was not prosecuted as a terrorist act, and the jury had not been told that he was regarded as a terrorist. This is because the jury was only asked whether he had committed the crime of murder or not, and because murder is only a crime under common law and not an offence under counter-terrorism legislation.

Nevertheless, Mair's crime was understood as of 'exceptional seriousness' by the court, since it had been committed to advance a cause associated with Nazism. He received a life prison sentence on 22 November 2016. The judge told him he was no true patriot, since he had betrayed the principles of parliamentary democracy which were at the heart of the country. He added:

'It is evident from your internet searches that your inspiration is not love of country or your fellow citizens, it is an admiration for Nazis and similar anti-democratic white supremacist creeds'. [10]

Thomas Mair was called 'an extreme rightwing terrorist' by The Guardian and the Daily Mail .[11]