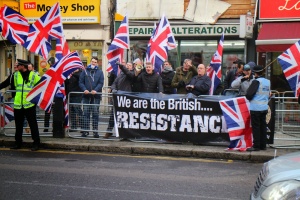 Paul Golding (with loudhailer) and Britain First supporters at a demonstration on Cricklewood Broadway, London, 18 January 2013. Photo: Kind thanks to KilburnHerald.com

Britain First is a small far-right political movement founded by ex-British National Party (BNP) activist Jim Dowson in 2011.[1] While having some similarities with the BNP and EDL, is more confrontational and militaristic, and places much more importance on the role of Christianity in its ideology.

In July 2014, founder Jim Dowson quit the group and cut its funding, after it released a series of videos showing leader Paul Golding and others entering mosques and intimidating imams. Dowson said it had been 'overrun' by 'racists and extremists' and said of Golding: 'I think he is fooling himself and lots of people that Britain First is a Christian group. Sadly, it has just become a violent front for people abusing the Bible.'[2] However, Dowson was reported in late October 2016 to have joined a Bulgarian armed militia called the Knights Templar International who hunt down and attack refugees crossing into Europe. In a youtube video, he said the Bulgarian border was a frontline in the battle against refugee 'invaders' who he claimed want to take over the world. [3]

On November 25 2016, Louise Haigh, Labour MP for Sheffield Heeley, insisted Britain First be listed as a 'terrorist organisation' following the murder of Labour MP Jo Cox by a far-right white supremacist. This would effectively prohibit the far-right group from arranging meetings or rallying support. The Leader of the House responded by saying: 'I’ll make sure that your proposal is reported to the Home Secretary but there has to be clear evidence of terrorist involvement for the terrorist proscription to be applied.' [4]

Britain First was founded in 2011 by two former members of the BNP, Jim Dowson and Paul Golding through the far-right website British Resistance [5] Other former members of the BNP joined them, including Andy McBride, the regional organiser for the South East, and the Welsh-based former councillor Kevin Edwards. The group claimed that their aim was to protect British and Christian morality. Golding, Edwards and McBride were named as leader, nominating officer and treasurer respectively. <[6]

In April 2013, Britain First’s hierarchy launched another political party called Protestant Coalition in Northern Ireland, with Dowson as leader and Golding as treasurer. Branded as an ‘anti-politics, political party' and joined by prominent loyalist campaigner Willie Frazer, the party, however, claimed to have 'no political ambitions'. [7] Britain First and Protestant Coalition they reportedly fell out in September 2013.[8]

It began to attract a significant number of disaffected EDL supporters towards the end of 2013—coinciding with the resignation of Tommy Robinson as the English Defense League’s leader. It announced that it intended to field candidates in the 2014 European elections. It only fielded candidates in Wales and Scotland, attracting 0.9% and 1.02% of the vote respectively. [9] [10]

Until the murder of British serviceman Lee Rigby in Woolwich, London in May 2013, neither Islam nor Muslims had prominently featured in any of Britain First’s strategies or actions. In the aftermath of the murder, the group posted a video on YouTube where it declared its intention to place Anjem Choudary under a citizen’s arrest if the police failed to immediately arrest him. For them, Choudary— spokesperson for various proscribed groups including Al-Muhajiroun, Ahlus Sunnah awl Jamaah and Islam4UK among others—was responsible for the radicalisation of Rigby’s killers, Michael Adebolajo and Michael Adebowale, so deserved to be arrested and put on trial. [11]

Chris Allen, a Lecturer in Social Policy in the Institute of Applied Social Studies at the University of Birmingham, states that from that moment onwards, 'Islam and Muslims have become increasingly prominent, both as an integral part of the group’s ideology and also its strategies and actions' (p.356) [6]

During the 2014 European Elections, it registered the phrase ‘Remember Lee Rigby’ with the Electoral Commission, using it on all its campaign material and on voting slips. [12]

Britain First claims it is committed to the maintenance and strengthening of the British Union while simultaneously recognising and celebrating the individual identities and cultures of England, Scotland, Wales and Northern Ireland. It insists on 'sovereignty' as all-important and for that reason supports the 'Brexit' camp. It specifically stresses the need to ensure the preservation of Britain’s ancestral ethnic and cultural heritage, its traditions (including Christianity, seen as forming the foundation of British society and culture, customs and values, including the revitalisation of traditional British industries such as agriculture and fishing.

They call for an immediate halt to immigration in order to safeguard the existence and lineage of the indigenous British people.

The group believes that it is a combination of 'alien and destructive political or religious doctrines, including Marxism, Liberalism, Fascism, National Socialism, Political Correctness, Euro Federalism and Islam' that have given preference to ethnic minorities at the expense of ‘genuine British citizens’, who have subsequently been relegated to second class status in relation to housing, jobs, education, welfare and health. [13]

On its website in September 2016, Britain First claims that it 'is a loyalist movement: this means that if you are loyal to Queen and Country then you are welcome to join our organisation. “Race” does not feature in our policies or outlook in any way.'

Further down one can read: 'Britain First is home to thousands of patriots from ethnic minorities from all over the world who share our defence of British values and our opposition to global Islamic jihad.' and 'Our opposition to immigration is based on space, not race. Britain First is opposed to all mass immigration, regardless of where it comes from – the colour of your skin doesn’t come into it.' [14]

However, Chris Allen claims that 'this distinction between ‘genuine British citizens’ and by extension, ‘fake’ British citizens—namely, ethnic minorities— illustrates a clear superior–inferior demarcation and also implies that the ‘fakes’ do not deserve to be treated the same as those of ‘us’ who are genuine. In essence, the justification for discriminating against ‘them’ is therefore to safeguard ‘us’.' (p.358) [6]

As opposed to both the BNP and EDL however, Christianity appears to play a significant role for Britain First, one that focuses on an apocalyptic endgame and ultimately salvation. There seems to exist something of a doomsday prophecy exists within the organisation, where the end of civilisation follows an apocalyptic battle between Christians and Muslims. [6]

Britain First claims to be both patriotic political party and a street defence organisation. It is conscious that it is filling the void left by the BNP and EDL and employs the strategies and ideologies of both groups. It states that the ‘fightback’ against the 'Islamification' of Britain needs to be pursued and that they are the ‘frontline resistance’ committed to it. [15] With such a militaristic approach, it is unsurprising to see that their actions are increasingly confrontational and direct, an approach which not only seeks to be intimidating but also highly provocative.

The organisation is notorious for its 'Christian Patrols', which consist of driving in British streets in ex-army vehicles, claiming to be 'protecting the peoples' streets'. [16]

Use of social media

With its great presence on social media, it has emulated a strategy successfully employed by the EDL and maximised its impact. Britain First has a website that is open to all, thereby providing immediate access to anybody wishing to find out more about it, including all of its videos. As is standard practice, the group film all of its members' actions and upload the results to the internet, where they show groups, almost always approximating five to ten members, performing direct actions such as entering mosques, confronting worshippers and imams, and so on. [18]

'The number of Facebook likes clearly does not equate to votes in the ballot box, but the impressive number of likes that Britain First has been able to attract not only enhances its populist appeal but provides it with a constant—albeit largely passive—constituency to whom it is able to drip-feed nationalistic and Islamophobic content.(...) It is highly unlikely that this will result in greater numbers of people taking to the streets to join the ‘frontline resistance’, but could mean that its audience will become increasingly receptive to its message.' (p.360) [6]

In August 2016 Britain First was banned from Luton and all mosques in England and Wales for the next three years following a High Court case brought by the Bedfordshire police. The officers accused the anti-Islam party of creating 'community tensions' by their activism. The ban applies to the leaders of the party, but activists for the anti-Islam group are also effectively subject to the ban, as leader Paul Golding, 34, and his deputy Jayda Fransen, 30, are even prohibited from directing their campaigners to the town. This includes its so-called 'Christian patrols'. [19]

On September 8th Paul Golding is investigated over a suspected High Court injunction breach. Activists filmed themselves entering an Islamic centre accused of being home to a 'radical' Imam in Cardiff on January 20, and the leader was reportedly present during this action. [20] In November 2016, Welsh police said they would take Golding to court following the incident.[21]

After stepping down as leader of the group a month before, Paul Golding was sent to jail for 8 weeks for breaching the High Court order on December 16 2016. [22]

In January 2016 Golding was found guilty of harassment of a Muslim woman and of wearing a political uniform signifying an association with a political organisation.

In November 2016, a court heard that deputy leader Jayda Fransen, launched a tirade of abuse at Sumayyah Sharpe during a Britain First 'patrol' in Luton on 23 January 2016. [23] 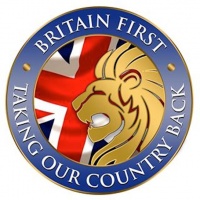