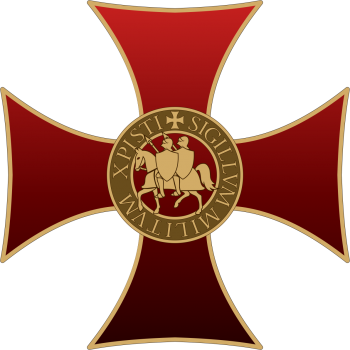 The Knights Templar International claims to be a London-based 'religious organisation' [1] and supports a Bulgarian armed militia that reportedly hunts and attacks refugees crossing into Europe.

The main aim of the organisation is to fight to the preservation of Christians allegedly under threat by 'Islam'. In their winter 2015 issue of their quarterly magazine, they write:

'We live in a period when the number of Muslims in Europe is exploding, due to higher birth rates and immigration. They get more rights and receive more help from European welfare systems, as well as funding from Muslim countries. Aided by leftist secularism, the balance of religions is shifting all over western Europe and Muslims will inexorably become the majority in more and more towns and cities.' [2]

'We have to stop the demographic decline of our people, but we also need to stop the advance of Islam in our suburbs.'
'[R]egarding demographics, we need to fight the liberal mentality, to raise awareness of the importance of protecting human life, and marriage. [...] Imposing death penalty on the unborn [i.e. abortions] should be banned, except for rare exceptions'.[2]

Diplomacy in the Middle East

'[W]e must stop fighting wars in the Middle East for Western oil corporations and other vested interest groups, and stop destabilizing Arab and African countries by backing supposedly 'moderate' rebels. Western wars and interference unleash massive population migration, so avoiding them will end the tidal waves of 'refugees' now swamping the West.'
'In the meantime Christian solidarity should be stronger, no government which persecutes Christians should receive any form of aid or arms sales, while more pressure should be put on countries like Saudi Arabia, Turkey, Pakistan and Algeria.' [2]

'The internal fight in Europe to counter Islamisation needs to start with the rejection of liberal laws aiding the destruction of our society. Citizenships grants should be slashed, benefits payments and health tourism for newcomers ended and foreigners should [be] banned from voting in Europe. In addition, strong measures are needed against the funding of terrorism and the spread of Islamist ideology and networks.' [2]

'Christian identity should be preserved not only by teaching children about our own religious heritage but also reminding people about contemporary Christian martyrs.' [2]

'Christianity is the most persecuted religion and Believers and Christian symbols are attacked in Europe as well as by Islamist regimes abroad.'

'Christianophobia and anti-Christian behavior from radical leftist, secularist and feminist movements is on the rise and these acts should not be tolerated.'

'In our globalized world, Europeans need a collective identity based on shared traditional values and conservative Christianity is the only source of this identity,' [2]

On their website, they claim to 'hold top level diplomatic meetings in Parliaments, Governors offices, Bishops palaces and corporate HQ’s almost every day of the week worldwide to make sure our agenda, your agenda, the agenda of Christ is presented to those who make the decisions that affect millions across the planet.' However, are 'noted for [their] discretion and secrecy', so:

'Sadly we can only report on a fraction of our missions as we routinely are asked to remain silent on the meeting we host or participate in and as Templars we guard our solid reputation for discretion with a fierce rigour.'

The organisation appears to have funded an armed Bulgarian militia to 'patrol' their border and prevent migrants from coming into the country by force [3]. The Facebook page seems to have been used to fundraise for 'material and surveillance material' which has been sent to ‘Bulgarian volunteers’[4].

The organisation reports being invited to speak at a 'traditionalist conference' in St Petersburg in its quarterly journal. They went to speak of the situation of Christians in Ukraine.

'Several Knights Templar brethren from a number of countries were invited to St Petersburg to attend the Russian International Conservative Forum. Its purpose was to create connections between politicians and thinkers united in our support of national traditions and opposition to globalism. Also on the agenda were discussions on setting up a permanent joint Russian-European commission to co-ordinate the traditionalist fight-back against liberalism and the nation-wrecking agenda of the social Marxists and globalists.'

'To build on the connections made at the conference, the leadership of our Order are now working on plans to help Pro-Life campaigners in Russia and to see if it is possible to provide aid to civilians in Eastern Ukraine whose homes and lives have been wrecked by shelling and attacks by the U.S puppet regime in Kiev.'

The individuals and organisations reported present in their quarterly were:

The The Interpreter also reported the presence of:

The KTI boasted their 'successful' mission to Syria in their Summer 2015 quarterly. A few delegates of the organisation managed to pass into Syria 'without anti security incidents' although their respective governments attempted to stop them. The main concern of the organisation is the 'protection' of Christians in the Middle East, which they are certain nwill only be guaranteed by a renewal of militant Christian faith. They wrote:

'Flying to Beirut, we met with key members of the Lebanese section of the Baath Party and the Syrian Social Nationalist Party. The next day we flew on to the Syrian coastal town of Latakia and then across the desert to Damascus. There we spent a hectic 48 hours meeting the leaders of the main Christian denominations, government ministers and leading political figures.' [5]

In their Winter 2016 edition of their Crusader Magazine, the organisation reported:

'We went to Hungary to counter the blatant pro-immigration propaganda spewed out daily by the Western media, portraying Hungary as "cruel" for closing their borders to the Islamic Invasion of Christendom.'
'The reality was truly shocking. We witnessed thousands of young Islamic fighters turning up at the border posts at Croatia, Serbia and Ukraine pretending to be innocent refugees. [..] [W]e identified many Al Qaeda, FSA and even ISIS terrorists trying to penetrate Europe through these border crossings.'

The article added that 'thankfully', they were able to film the 'evidence' and disseminate their footage to news agencies without revealing their identities:

'We supplied credible evidence to news agencies that many of you have now seen but probably had no idea that it was the Knights Templar volunteers who shot and supplied much of the genuine footage coming out of Eastern Europe.'

The report continues, saying that a few members of KTI were then 'invited to attend high level discussion in the National Parliament', adding that their mission 'was very well received and the Order was treated with great respect from the elected representatives'. [2]

On their website, their promotional video used to recruit new members states their ideology clearly: the organisation believes that Christendom and Western Civilisation are in mortal danger, and can only be saved 'by dedicated militancy in the demonic teeth of evil'. The video also explains their internal organisation and 'iron' hierarchy. The organisation seems to be only open to cisgender men. [7]

The promotional video clearly attempts to prove that members of this organisation are not racist or hateful in anyway. However, Tell MAMA reported in November 2016 that their Facebook page had published racial demographic theories and anti-semitic conspiracy theories.[4].

According to the Express newspaper, former BNP and Britain First co-founder Jim Dowson joined the group in October 2016 and was also spearheading efforts to connect the heavily armed group with large right-wing donors in Europe, America and Asia. In a youtube video filmed in a forest, Dowson said the Bulgarian border was a frontline in the battle against refugee 'invaders' who he claimed 'want to take over the world'. [8]

The organisation has a quarterly Crusader Magazine, 'with the latest news from the Order, our missions we undertake and the latest updates from situations around the world.' [9]