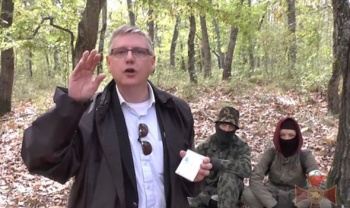 Jim Dowson is the co-founder of the far-right anti-Muslim Britain First party and group, and former member of the British National Party. He is reported to have joined an anti-migrant Bulgarian armed militia named Knights Templar International.

Background with the British National Party

A Scottish Calvinist minister, Dowson has been described as an evangelical Protestant known for being both active and vociferous in campaigning against abortion, primarily with the UK Life League. He joined the British National Party (BNP) in 2007 and allegedly impressed the BNP’s hierarchy due to his close relationship with loyalist paramilitaries from Northern Ireland. In 2009 BNP leader Nick Griffin gave Dowson - who was then promoted to chief fundraiser - the task of overseeing the move of the BNP’s entire operation to Belfast, which was a success.

When the party performed badly in the 2010 local and general elections, Dowson started a campaign that openly attacked Griffin. [1]

He split from the BNP in October 2010 following allegations that he had sexually assaulted a female colleague, Shelley Rose, who had once stood as an electoral candidate in Bedfordshire. [2]

He created Britain First with Paul Golding, a former BNP councillor, launching it in May 2011 via the far-right website British Resistance. [3] Other former members of the BNP joined them, including Andy McBride, the regional organiser for the South East, and the Welsh based former councillor Kevin Edwards. [4]

In July 2014, Dowson quit the group after it released a series of videos showing leader Paul Golding and others entering mosques and intimidating imams. Dowson said 'racists and extremists' had 'overrun' the group, and that:

I think [Golding] is fooling himself and lots of people that Britain First is a Christian group. Sadly, it has just become a violent front for people abusing the Bible.[5]

In June 2015 ex-UKIP parliamentary candidate Anne Marie Waters and other UK counterjihad figures announced they wanted to hold a public showing of Prophet Mohammed cartoons in London, with Dutch MP Geert Wilders as a guest speaker.

Dowson was, according to the counterjihad blog Gates of Vienna, so appalled he 'took to his Knights Templar [International] blog to share his disgust at the plans'. In a blog entitled: ‘Private: Warning – Muhammad cartoon provocations would not serve our cause’, he wrote:

Those behind this insanely dangerous idea believe (probably correctly) that heavily armed Muslim drugs gangs will be drawn into the clashes and that Jihadist sleeper cells will also seize the opportunity to come out as militant leaders of their community as part of a massive recruitment and radicalisation drive. With the same stunt to be pulled on the same day in [other] countries [...] the people behind the whole plan believe that there is a real chance of kicking off a Europe-wide civil war.' [6]

Waters' event was later called off due to 'security concerns'.

<youtube size="medium" align="right" caption=“Promotional video released by the extreme right group Knights Templar International with Jim Dowson defending their 'patrol' of Bulgarian borders against refugees in October 2016]”>GkahpIGJByc</youtube> In October 2016 tabloid newspaper reports said that Dowson had joined a Bulgarian armed militia called the Knights Templar International who hunt and attack refugees crossing into Europe. Dowson however had held a blog under the same name at least since 2015. [6]. According to the Express newspaper, he had also spearheaded efforts to connect the group with major right-wing donors in Europe, America and Asia. In a youtube video standing in a forest with armed men wearing balaclavas, Dowson said the Bulgarian border was a frontline in the battle against refugee 'invaders' who he claimed 'want to take over the world'. [7]

In December 2016, the New York Times claimed that Dowson was behind a fake news website - Patriot News Agency - that pumped out anti-Hillary Clinton propaganda during the US presidential election, including that she was linked to conspiracies involving Satanism, paedophilia and murder.

The newspaper asserted that Dowson made it his mission, according to messages posted on one of his sites, to 'spread devastating anti-Clinton, pro-Trump memes and soundbites into sections of the population too disillusioned with politics to have taken any notice of conventional campaigning'. He said he engaged with the US presidential election because of what he saw as 'liberal bias' in the mainstream media.

'The simple truth is that after 40 years of the right having no voice because the media was owned by the enemy, we were forced to become incredibly good at alternative media in a way the left simply can't grasp or handle'.[8]