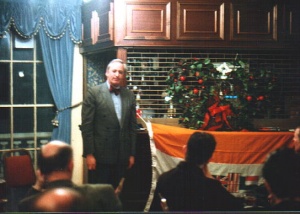 Neil Hamilton speaking to the Springbok Club in front of an apartheid-era South African flag - The Independent, 11 June 2014.

The Springbok Club (SC), also known as the Empire Loyalist Club (ELC), is a far-right neo-imperialist organisation based in London which has used the apartheid-era South African flag as its logo.

Journalist Johann Hari described it as a “small, sinister group of British-based South African and Zimbabwean exiles” that “regards itself as the shadow white government of South Africa”.[1] The Club’s founding principles declare that it wishes to take steps to restore “civilised rule” to the African continent, which may be a reference to the end of white supremacy in southern Africa.[2]

In 2013, it was reportedly chaired by Alan Harvey, also described as its founder by some sources. He is British but formerly lived in South Africa.[3][4]

According to anti-racist magazine Searchlight, the Springbok Club was founded on 12 June 1996 through a merger of the White Rhino Club (WRC) (II) - itself founded in London in 1992 and the successor to the Durban-based WRC (1) – and the Rhodesian Forum, which was set up in London in the late 1980s by Kevin Puttock.[3]

Africa, Race and the British Empire

According to Hari, the founder of the Springbok Club is a former member of the neo-fascist National Front, and has said:

"In a nutshell our policy can be summed up in one sentence: we want our countries back, and believe this can now only come about by the re-establishment of civilised European rule throughout the African continent."[1]

Hari may have been referring to Alan Harvey, who chaired the organisation in 2013 and was a member of the National Front between 1974 and 1975. He has reportedly described the Springbok Club in the following terms:

"We see ourselves as the nucleus of the South African resistance movement in exile”. [3]

According to blogger Richard Bartholomew, the Northern Ireland Springbok Club’s website introduced itself with the following message:

“Welcome To The Northern Ireland Springbok Club Where the British Empire Lives On!”[6]

Honorary Life President of the Northern Ireland section, Jim Dixon - a survivor of the 1987 Enniskillen bombing - told the Daily Ireland in 2006:

“It’s wrong that blacks are coming to Northern Ireland…I couldn’t care less if people call me a racist. I couldn’t care less what they think. Apartheid meant the black man was better treated and respected. Immigration is a recipe for trouble. It shouldn’t happen anywhere. Each to their own. Other races should have their own schools, hospitals and buses.” [6]

According to one source the Club “forms part of a closely-linked network of far-right groups occupying the space between the Conservative Party and the British National Party (BNP).[7]

The British High Commission has accused the club of spreading "hate literature".[1]

In November 2001, right-wing historian Andrew Roberts was guest of honour at a Springbok Club dinner held to mark the anniversary of Rhodesia's unilateral declaration of independence, a rejection of international pressure to enfranchise black people. The Club's website gave the following account of the event:

The Springbok Club held a most successful dinner to mark UDI Day in November 2001, when we were most honoured to welcome Mr. Andrew Roberts, the acclaimed historian and author, as our guest of honour. Mr. Roberts gave an inspiring after-dinner speech in which he outlined the history of 19th century British colonial expansionism and the foundation of Rhodesia, detailing the events which made UDI inevitable in 1965, and bringing the story up to date by reminding everyone of the disasters of modern-day Zimbabwe. He finished his speech by proposing a toast to the Springbok Club, which he said he considered the heir to previous imperial achievements.[9]

When I first pointed out this connection, Roberts said he gave a "historical speech", hadn't realised the Springbok Club was a racist organisation, and didn't recall anyone saying anything racist. Wasn't the apartheid flag, and the fact they were there specifically to celebrate the anniversary of a white supremacist declaration, a hint? [1]

In July 2004, Professor David Marsland, the Director of Research in the Department of Health and Social Care at Brunel University and a “patron” of Anglican Friends of Israel, spoke at the club and delivered a speech which began:

"We British – including the whole Anglophone diaspora – are slow to anger. But given sufficient provocation, we kick the hell out of everyone in sight. This is our tradition. It is a good tradition which has served the world well. It has been subverted in recent decades by communist propaganda, utopian dreams, and humanitarian fantasies. My aim in this paper is to repair, defend and justify our tradition of ruthless action on behalf of freedom. I take my text from an American prisoner of war in Japan. “When I heard we dropped a bomb on Hiroshima,” he said, “I thought, great – let’s drop ten more”.[10]

Marsland ended his speech with a series of authoritarian, if not fascistic, recommendations including calls for summary executions, indefinite secret detention, racial profiling, ethnically segregated flights, mass deportations, surveillance of Muslims and censorship of the press, including the following calls:

Marsland was also scheduled to speak at the Springbok Club in 2008.[12]

In late March 2007, barrister and security consultant Michael Shrimpton gave a talk to the Springbok Club/Empire Loyalist Club which lamented the passing of the 'old' South Africa. After interviewing Shrimpton for TheLawyer.com, journalist Fiona Callister wrote of him:

Now here's the funny thing about Shrimpton: he constantly comes out with statements that you thought no one believed anymore…before I can relax into liking him, I have to deal with the nagging worry that Shrimpton's views make him, well, racist.[13]

Philip Benwell MBE, chairman of the Australian Monarchist League has been described as a “regular speaker” at events jointly hosted by the Springbok Club and the London Swinton Circle. [7]

Other guest speakers have reportedly included:

In addition, the Northern Ireland Branch of the Springbok Club held a special meeting to celebrate the achievements of the British Empire in June 2004, where the guest speaker was the Rev. Martin Smyth, the Ulster Unionist Party MP for Belfast South.[7]

In June 2016, after 52-year-old Thomas Mair was charged with the murder of British Labour MP Jo Cox, it emerged that Mair was mentioned in a Springbok Club newsletter from 2006. It described him as “one of the earliest subscribers and supporters of S.A.Patriot”, the magazine published by the club.[15] However, it also suggested that his connection with the Club had ended prior to 2006. A statement was issued by S.A. Patriot editor Alan Harvey stating that Mair had been a subscriber in the 1980s but dissociating the Club from Mair.[16]

Harvey's claim that the club had "no further contact with him after a brief correspondence in the mid 1980s" was contradicted by the emergence of two letters by Mair published in South African Patriot in Exile 1991 and 1999. He states that he was introduced to the magazine by the British National Front, rails against "collaborators" and "traitors" and concludes "I still have faith that the White Race will prevail, both in Britain and in South Africa, but I fear that it's going to be a very long and very bloody struggle".[17]

In court, Mair gave his name as "death to traitors, freedom for Britain".[18] Neo-Nazi regalia was found in his house by police and witnesses to the murder alleged that he shouted either “put Britain first” or “Britain First”, possibly a reference to the far-right political party. The Southern Poverty Law Center published receipts it said showed Mair had more recently supported the US neo-Nazi group National Alliance.[19]