The Free Society (TFS) is a libertarian grouping launched by the smokers’ lobby group FOREST 'to give a voice to those who want less not more government interference in their daily lives'. [1]

The Society's goal is to develop a network of like-minded people [2] and 'a society that adopts a sensible, laissez-faire approach to social and economic affairs, trusting people to make their own decisions about how best to live their lives, mindful of the effect their behaviour may have on other people'.[1]

It focuses on key issues such as the environment, food and drink, free speech, motoring, smoking, surveillance and taxation. These issues and others are tackled through affiliations with influential think tanks and campaign groups. In its own words:

Confronted by an ever expanding army of politicians, bureaucrats and special interest groups who seem determined to limit our freedoms through social engineering and censorship, The Free Society will discuss freedom and its limits and encourage national debate on a wide range of issues.[1] 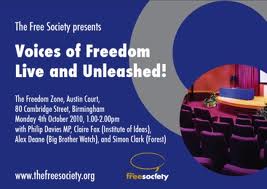 The 'Freedom Zone' 2010, a project of the Freedom Association. This session sponsored by FOREST via its campaign The Free Society. Speakers included Philip Davies MP, Claire Fox, Institute of Ideas and Simon Clark of tobacco industry funded FOREST

The Society's website outlines its areas of interest and rationale for defending people from what it calls "the bully state':

For years Forest has warned that it was only a matter of time before campaigners (and politicians) moved on to food and drink. So it has proved. Today the “war on tobacco” has been joined by the “war on obesity” and the “war on binge drinking”. As with smoking, we support campaigns that educate people about the risks of over-indulging (as long as the information is factually correct), but we abhor the use of dubious statistics and doomsday scenarios to justify increased taxation and further legislation designed to dictate how we choose to live our lives.

In 2008 it listed on its website support for the following 'campaigns':

The website of The Free Society says it welcomes both individual and corporate donations 'to support the cost of our website, publications, research and events'. [6] No details of donors are given. As an 'offshoot of FOREST', which is 96 per cent funded by the tobacco industry, the Society's donors may well include tobacco companies. They could also include alcohol and food companies, and car makers, in view of Simon Clark's comments over a decade ago at a House of Commons Health Select Committee hearing that he "would love to get funding from all sorts of different sources... to go to other areas which I believe might be under attack in future years from what I call the nanny state. I should love to go to breweries for example. I should love to go to car manufacturers and ask for some money."[7]