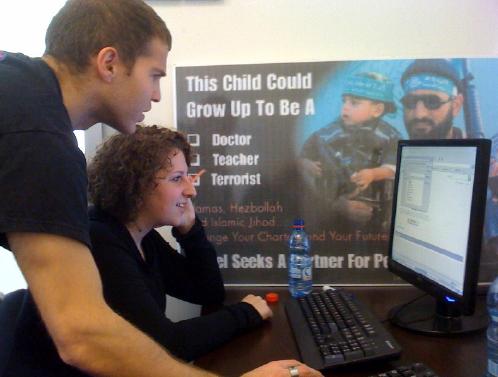 The "Stand With Us" situation room at the Interdisciplinary Center Herzliya during operation 'Cast Lead'. The poster in the background depicts children in Gaza as potential terrorists. According to UNICEF some 431 children were killed and 1,872 wounded during the Israeli assault. [1]

StandWithUs is a pro-Israel advocacy organisation.

StandWithUs was founded in Los Angeles in 2001 by Roz Rothstein, her husband Jerry Rothstein and Esther Renzer.[2]

StandWithUs is an international education organization that ensures that Israel's side of the story is told in communities, campuses, libraries, the media and churches through brochures, speakers, conferences, missions to Israel, and thousands of pages of Internet resources.[3]

The Middle East Times claimed in March 2009 that StandWithUs had been established by the Israeli Foreign Ministry.[4]

StandWithUs is a sponsor of HelpUsWin.org, a pro-Israel social networking campaign launched at the IDC Herzliya during the Israeli offensive in Gaza in January 2009.[5][6]

In January 2015, Israeli media website The Seventh Eye reported that the Israeli Prime Minister's Office (PMO) is to pay StandWithUs (SWU) $254,000 in matching funds 'for a year-long program to disseminate hasbara, or official Israeli spin, in times of routine as well as crisis'. During Israel's recent attacks on Gaza, the PMO's National Information Directorate (NID) paid students to promote Israeli talking points online, with '"war rooms" set up on Israeli campuses'. SWU's 'Social Media Ambassadors' program is 'an expansion' of this, and will see SWU and the NID 'train Israeli, American and British students to carry out this task'.[7]

We saw during Operation Protective Edge the energy and dedication of young people who took to social media to share their experiences of living under Hamas rocket fire. This program aims to empower people with skills so they can convey their first-hand experiences about Israel to a wide audience on social media.[7]

This is an exciting opportunity for young people to volunteer and learn for themselves about the best way to communicate Israel's message. Too often, those who know the truth about Israel's actions, especially in times of conflict, are drowned out by voices spreading misinformation on the Internet. This program could remedy that.[7]

StandWithUs is behind the group Creative Community for Peace (CCFP) which works to counter the cultural boycott of Israel in Hollywood and beyond. SWU has channeled donations to CCFP, shares an office with it, registered its name (along with 'Israel Emergency Network' or 'Israel Emergency Alliance') and website and has a closely overlapping board. While SWU is outspokenly pro-Israel, CCFP claims it is non-political and seeking only to stop restrictions on the exchange of music and the arts.[8]

CCFP is a 501(c)3 organization that does business under the name Israel Emergency Alliance[9], aka StandWithUs.


After a number of high profile celebrities expressed public criticism of Israel and/or sympathy for Gaza during 'Operation Protective Edge' (Jul-Aug 2014), Creative Community for Peace published a statement signed by nearly 200 entertainment industry workers condemning Hamas for its '[ideology] of hatred and genocide, its rocket attacks on Israel and for holding Gazans 'hostage':

Hospitals are for healing, not for hiding weapons. Schools are for learning, not for launching missiles. Children are our hope, not our human shields.[10]


On 13 September 2014 CCFP published the statement, along with a list of signatories, as a full page ad on p. A7 of the New York Times.[11] The statement was also reportedly published in Billboard, Variety, The Hollywood Reporter and Deadline Hollywood.[12]


CCFP's website at this time included a special thank you message to the Jewish Community Foundation of Los Angeles for a 'Cutting Edge' grant 'that is allowing us to expand our work'.