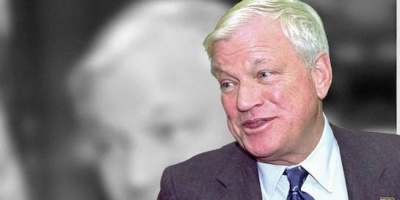 Richard Mellon Scaife (1932- ) is an American billionaire and newspaper publisher. He is principal heir to the Mellon oil, banking, aluminium, and uranium fortune. He is known for his financing of conservative public policy organisations through the foundations he controls, including the Sarah Scaife Foundation, Carthage Foundation, Allegheny Foundation, and (until 2001) the Scaife Family Foundation. Collectively, these are referred to as the Scaife Foundations.

In her article "Citizen Scaife", Karen Rothmyer argues that Richard Mellon Scaife has "used his immense wealth to shape today's political climate" in his role as "the prime funder of the media-savvy New Right". Rothmyer recounts Scaife's brief ownership of a publication with alleged CIA links:

Scaife's one foray into international publishing represents perhaps the most curious of his publishing enterprises. In 1973, he became the owner of Kern House Enterprises, a U.S.-registered company. Kern House ran Forum World Features, a London-based news agency that supplied feature material to a large number of papers around the world, including at one time about thirty in the U.S. Scaife abruptly closed down Forum in 1975, shortly before Time Out, a British weekly, published a purported 1968 CIA memorandum, addressed to then-director Richard Helms, which described Forum as a CIA-sponsored operation providing "a significant means to counter Communist propaganda." The Forum-CIA tie, which lasted into the seventies, has been confirmed by various British and American publications over the years, and it was confirmed independently by a source in connection with this article.[2]

Steve Emerson received money from Scaife for his documentary Jihad in America.[3]

The Scaife Foundations have heavily funded other influential organisations in the counterjihad network such as the David Horowitz Freedom Center and Frank Gaffney's Center for Security Policy.