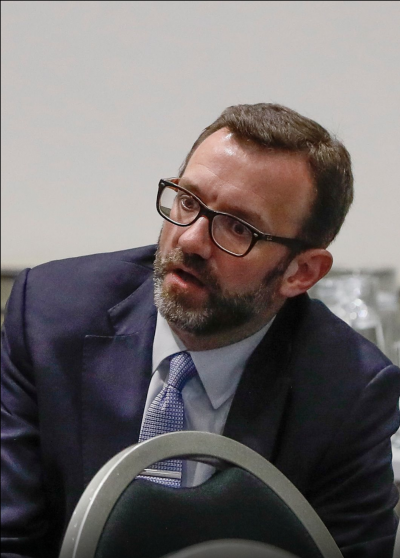 Richard Chalk in Estonia in March 2017

Richard Chalk was head of the British Home Office's Research Information and Communications Unit (RICU) between 2012 and around 2016.[1] 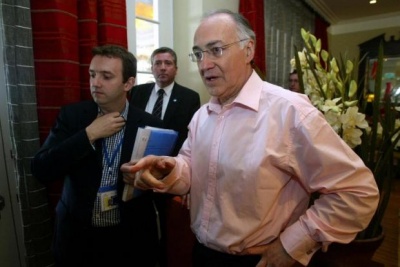 Richard Chalk (on the left) with Michael Howard in 2005

Spinning for the Conservative Party

Chalk has a long-standing association with the Conservative Party. In 1997, he stood as a parliamentary election candidate, reportedly describing himself as fuelled by 'religious conviction' and a 'passionate rejection of the dogma and dangerous idealism of a Socialist agenda'.[2] At this time Chalk worked as an investment manager for British Aerospace.[1]

In 2003 he was also quoted as saying: 'I’m so dedicated to politics that I’m prepared to spend Valentine’s Day on the hustings'.[3]

In 2001 Chalk reportedly masterminded Ken Clarke’s leadership bid against Iain Duncan Smith.[3] Chalk was later appointed by Duncan Smith as director of planning in 2003, and acted also as deputy to the director of strategic communications, Paul Baverstock.[3][4][5] The Sun credits Chalk for the 20 standing ovations Duncan Smith received for his Tory conference speech in the same year.[6] Chalk subsequently worked as a spin doctor under former party leader Michael Howard in 2004,[7] before overseeing press relations for Ken Clarke’s unsuccessful leadership campaign in 2005.[8]

In 2005-2006 Chalk worked in Baghdad for British public relations firm Bell Pottinger Communications, where he was commissioned to deliver multi-channelled communications campaigns.[9] In a $5.8m (£3.2m) deal, Bell Pottinger had been appointed by the Coalition Provisional Authority to promote democracy in Iraq preceding the handover of power to the Iraqi Interim Government on 30 June 2005.[10] Chalk’s work, some of which is confidential, included 'information operations' aimed at undermining the insurgency. Scott Brown, who in 2016 is a director of Breakthrough Media Network - which currently works for RICU - also worked for both the Conservatives and Bell Pottinger’s information operations team in Baghdad.[1]

Chalk returned to the UK in 2006 to fulfil an 18-month contract as chief of staff under the then Conservative Party co-chair Sayeeda Warsi.[1][9]. In 2008 he became the chief executive of M&C Saatchi’s Middle East operation.[9][11]

Chalk was reportedly hired to head RICU in 2012 because of his expertise in counter-terrorism strategic communications. According to The Guardian:

Under Chalk’s leadership, Ricu began communicating with British Muslims in a manner more reminiscent of counter-insurgency operations than a traditional public information campaign: disseminating messages through the use of subterfuge.[1]

The Guardian also reported that Chalk supervises at least some of the work carried out by RICU’s contractor Breakthrough Media Network. Breakthrough produces films, Twitter feeds, Facebook profiles, YouTube clips and online radio content. One of its objectives is to 'influence online conversations by being embedded within target communities via a network of moderate organisations that are supportive of it’s [sic] goals.' It also seeks to help the British Government 'promote a reconciled British Muslim Identity.' The Guardian states:

Ricu and Breakthrough focus on 'Prevent priority areas' in the UK, using keywords and paid-for Google and Facebook adverts to target people whose browsing history suggests they are Muslims. Using so-called 'promotion and diversion techniques', Breakthrough promotes Ricu’s messages to browsers who are searching for terms such as Isis, Khalifa and “What does the Qur’an say about jihad?”[1]

Leaked papers acquired by The Guardian suggested that one of Breakthrough’s campaigns created under RICU’s instruction, Help for Syria, has been used secretly as a counter-radicalisation scheme for Britons wanting to assist fellow Muslims in Syria. The campaign funnels aid to Syrian refugees, but allegedly aims to divert British Muslims into UK-based charity aid as opposed to travelling to deliver aid or join the jihad in Syria. RICU’s involvement in Help for Syria is not openly advertised.[12]

A report by CAGE stated that under Chalk’s guidance, RICU has played a central role in delivering campaigns to secretly steer the conversation within Muslim communities on issues such as ‘extremism’ and ‘radicalisation’, and to garner support for the Government’s counter-terrorism policies.[13]

In March 2017 Chalk appeared at a number of conferences representing the European Strategic Communications Network.

In Estonia Chalk was reported as saying the following (Translated from Estonian by Google translate):

1:26 pm
Chalk: The arrival of the Islamic State (Daesh) meant a major change in the world of terrorism. Military defeats have led to a change in their propaganda, now calling for local ultra-violent attacks. Such are the terrorist attacks in Nice, Berlin and London.
1:29 pm
Chalk: Both Daesh, al-Qaeda and right-wing extremists are creating aggressive messages that we are against.
1:31 pm
Chalk: Not only a counter narrative is needed, but also alternative narratives. There is a need to show young people alternatives to terrorism.
1:57 pm
Chalk: The Islamic State is a brand that has certain features that are advertised. It is sold like other brands. A brand relies on emotional attraction, it can be undermined if you show that the brand does not really deliver what it promises. It has been done. If the advertised item is not as advertised, it will soon become known.[16]

In June 2013 Chalk co-chaired the Global Counterterrorism Forum’s organised UN Conference on 'Best Practice in Communications' in London. The talk concluded that 'practitioners must take a strategic approach to countering violent extremism communications work and articulate the totality of a government’s engagement on a given issue', and that 'policies must be aligned with messages in order to be credible'.[17]

Chalk was invited to speak at the Security and Counter Terror Expo on 19 April 2016. His talk covered the efficacy of the Government’s PREVENT strategy in dealing with radicalisation.[18]

Chalk is the sole director of REOC Communications Limited which was registered in 2006.[19] His former colleague at Breakthrough Media, Tony McMahon lists a post as a consultant at REOC on his LinkedIn profile.