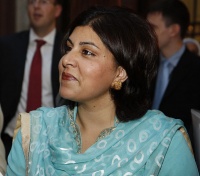 Sayeeda Warsi (Baroness Warsi) is a Conservative peer in the House of Lords.[1]

She was appointed Senior minister of state at the Foreign Office and minister for faith and communities in September 2012.[2] She was previously Minister Without Portfolio in the UK Cabinet appointed in 2010[3] and Chair of the Conservative  Party. She resigned from the Cabinet on 5 August 2014 over the Gaza conflict. [1]

In March 2015 Warsi was appointed an adviser of Shire Bed Company, a family company that she was already a shareholder of.

As of May 2015, the Advisory Committee on Business Appointments approved Warsi's request to become an adviser to Rupert's Recipes Ltd, a family company in which she is a majority shareholder. [4]

Baroness Warsi sought the advice of ACOBA once more regarding a role as Pro vice chancellor for the University of Bolton. The Baroness was advised not to draw upon any privileged knowledge from her time in government and to serve a 2 year lobbying ban from her last day in office, and she took up the appointment in January 2016. [5]

In June 2012 the House of Lords Standards Commissioner Paul Kernaghan launched a formal investigation into Baroness Warsi's expenses claims. She is facing allegations that she claimed for accommodation expenses while staying at the house of her friend, Tory official Naweed Khan rent-free in 2008. Khan is now her special adviser. At the time, she claimed Lords' subsistence of £165.50 a night.

A separate inquiry was ordered in the same week by Prime Minister David Cameron into whether Warsi breached the ministerial code when a business partner accompanied her on an official visit to Pakistan. [6]

Warsi's role with the Shire Bed Company was approved by the Advisory Committee on Business Appointments subject to the conditions that 'she should not draw on privileged information available to her from her time in Government'; and 'for two years from her last day in ministerial office she should not become personally involved in lobbying the UK Government on behalf of the Shire Bed Company or its clients'.[7]