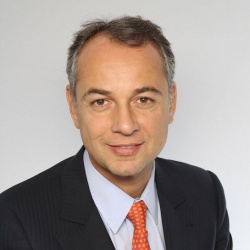 Philippe Karsenty is a French journalist and media critic. After a brief foray into French politics in 2002, he founded Media Ratings, a media rating agency which 'has paid particular attention to the failure of the French media to document the rise of militant Islam in France.'[1] The agency was disbarred on August 17 2012. [2].

He is the deputy mayor of Neuilly-sur-Seine and the founder and director of an editing house named La Maison d'Edition which prints out far-right and pro-Israeli literature on topics such as 'Islamisation' and the 'Al-Dura Affair'. [3]

In 2004, Karsenty claimed that a photographer staged footage shown by France 2 of the death of 12-year-old Palestinian Mohammed al-Dura at the hands of the Israeli Defence Forces in 2000.[4] The video was circulated throughout the world, and could be seen as a trigger for the Second Intifada.[5]

He was sued for libel by the French television network. France 2 won its case in October 2006, but the judgment was overturned during an appeal in May 2008, when France 2 refused to release the full footage taken by their stringer on that day.[5] France 2 appealed the decision [6] and in June 2013, the Paris Court of Appeals once again convicted Karsenty of defamation, claiming that he falsely accused the network’s Jerusalem bureau chief, Charles Enderlin, of fabricating parts of the segment, and fined him €7000. Karsety called the verdict 'outrageous'. [7]

For almost the entirety of the affair, he claims to not have been helped, but rather shunned and sabotaged, by most officials in the Israeli State. [8]

'After the Burqa, the muzzle'

In August 2016, Karsenty attended a conference organised by the American Freedom Alliance called Islam and Western Civilization: Can they Coexist? in which he delivered a speech concerning jihad and the 'islamization' of Europe. He ended his speech by showing a picture of a woman he had seen during his trip to Abu Dhabi who was wearing a muzzle, and warned that this could be seen in France if 'islamists' weren't strictly regulated. He then gave an interview with Riposte Laïque where he repeated this story. It was disseminated in several newspapers, including Europe-Israël [9], JSS News [10], the extreme-right newspaper Dreuz [11] and the Gates of Vienna website [12]

In the same interview, he openly expressed his support for Donald Trump in the 2016 US elections.

He stood as a dissident right-wing candidate, against the candidate endorsed by the UMP, in the Eighth constituency for French residents overseas (mostly French residents in Israel, but also in Italy, Turkey, Greece and several other countries) for the 2012 legislative election.[13] He lost, and in February 2013, the Constitutional Council found irregularities in the funding of his electoral campaign, thus barring him from standing for public office for a period of one year. [14]

In a 2016 interview, he stated his determination to be a candidate in the 2017 legislative elections. [10]